Good morning, and ... What is it I hear? You want to know the names of the characters played by the actresses and actors visible in the photograph above? Am I not entitled to a small hello? Sigh. Know then, my slightly overenthusiastic reading friend, that said actresses and actors played the following characters in the Québec science fiction television series Opération-Mystère:
- Luce Guilbeault, Cellamare, an extraterrestrial,
- Marcel Cabay, Professor Narthon and Arsène, 2 naughty and kind Earthlings,
- Georges Groulx, Tanar, an extraterrestrial,
- Louise Marleau, Luce Falardeau, an Earthling and the young heroine of the series, and
- Hervé Brousseau, Luc Falardeau, an Earthling and the young hero of the series.

You have another question? Sigh squared. Did the premiere of this series take place in December 1959? Err, no. Before you ask me if the last episode of Opération-Mystère went on air in December 1959, allow me underline that yours truly is offering himself a little Christmas present by placing online an article on this television series in this month of December 2019. I promised, in a September 2018 issue of our blog / bulletin / thingee, to prepare a text on said series, don’t forget that. I said, in an October 2019 issue of this same publication, that I was thinking about the possibility of looking at the idea of ​​writing an article on Opération-Mystère, but not in 2019, you say? Oh. Well, yours truly simply changed his mind. Sue me.

As poorly known / forgotten as it is in 2019, Opération-Mystère occupied / occupies an honourable position in the pantheon of Québec / Canadian science fiction television. It was / is indeed the first French language series of its kind in North America, if not in the world. The Canadian state broadcaster, the Société Radio-Canada, mentioned many times in our blog / bulletin / thingee since September 2018, could / can be proud of it.

The premise of Opération-Mystère was / is simple. A sinister scientist, Professor Narthon, was plotting with the Martian government to destroy the Earth. Two young siblings, Luce and Luc Falardeau, got wind of this and tried to stop him – with the help of a nice robot, Oscar. By the way, the actor who played the role of said robot was / is no stranger to us. He was / is indeed a perfectly bilingual Quebecer of African and Portuguese origin, Percy Rodriguez, perhaps (?) born José Rodrigues, mentioned in an October 2019 issue of our blog / bulletin / thingee.

Would you believe that another robot carried the very poetic name of… 3.1416 – the approximate value of the number pi? Better yet, to access Professor Narthon’s secret laboratory, you had to know that its entrance was in the trunk of a large tree.

You will remember, my reading friend, that an issue of our blog / bulletin / thingee published in October 2017 was entitled A brief episode in the life of “Pi.” The “Pi” in question was American helicopter pioneer Frank Nicholas “Pi” Piasecki.

An idea comes to me and no, you don’t rush to the nearest exit, that’s very rude. An idea comes to me, say I. Would it not be interesting to create a traveling / virtual temporary exhibit on mad scientists / supervillains, or those judged to be such, which would examine why many people have come to think that many / all scientists, or even science, in part or in totality, were / are (potential?) enemies of humanity? Victor Frankenstein, the antihero of the famous gothic / horror / science fiction novel Frankenstein; or, the modern Prometheus, published anonymously in January 1818 by Mary Wollstonecraft Shelley, may well be the archetype of this rather fascinating type of character. Just sayin’.

Did you know that each of the 30-minute episodes of Opération-Mystère was filmed live, just like those of Kosmos 2001, the second French language science fiction television series in North America, if not in the world, and a series mentioned in an October 2019 issue of our blog / bulletin / thingee, with all the risks that such work without a net could involve, both for the actors and the technical staff working behind the cameras?

Allow me to mention, for example, the scale models of flying saucers pulled by wires, sometimes clearly visible, that moved more or less efficiently in a night sky created in a studio.

This being said (typed?), the show’s young audience seemed fascinated by the narrative imagined by Opération-Mystère’s writer Léon Dewine / Dewinn / Dewinne. An obvious proof of the popularity of this television series was that, in back alleys of Montréal and elsewhere in Québec, children recreated / imagined stories based on it.

Would you believe that the premiere of Opération-Mystère, at the end of June 1957, perhaps / apparently gave rise to a mini panic similar to the one surrounding the broadcast, at the end of October 1938, of one of the most amazing and scariest Halloween shows ever, by a brilliant young American, George Orson Welles, with the help of his team Mercury Theater, namely a modernised version of the masterful scientific romance dating from 1898 of British author Herbert George Wells, arguably his most famous work, The War of the Worlds. The management of the CBFT television station of the Société Radio-Canada was not amused. And yes, my reading friend, that was a long sentence.

As we both know, Welles’ show was mentioned in a July 2019 issue of our blog / bulletin / thingee. Wells and The War of the Worlds, on the other hand, were mentioned in some issues of this same publication known worldwide, yes, yes, worldwide, and this since November 2018.

An interesting detail if I may. The musical theme of Opération-Mystère was / is Man from Mars. This musical piece dating from 1956 was / is one of the many creations of Ferrante & Teicher, born Arthur Ferrante and Louis Teicher, a well-known duo of American pianists active from the late 1940s to the late 1980s, but I digress.

The last episode of Opération-Mystère went on air on an undetermined date. Yours truly also does not know the exact number of episodes (80?). In fact, the television schedules published in the magazine La semaine à Radio-Canada suggest that Opération-Mystère was on the air
- from June 1957 to June 1958,
- from September 1958 to June 1959,
- from April to June 1959, and
- from November 1960 to May 1961.

Be that as it may, I presume that the sinister Professor Narthon and his Martian allies failed to destroy the Earth – unless of course the Earth in question existed in a universe parallel to ours. Expert in science fiction and physics / cosmology as you are, my reading friend, you obviously know all there is to know about the multiverse. Come on, come on, I’m listening. And no, the multiverse had / has nothing to do with poetry. The theory of multiple universes, say ye, assumes that our universe coexists with an infinite number of universes more and more different from each other, and inaccessible to each other. Very good. You are entitled to a gold star.

If I may be permitted to digress, for the 1 357th or the 1 359th time, unless it’s the 1 355th time, I forget, I’m old, the 5 actresses and actors visible in the photograph at the very beginning of this article continued to make their career in the fields of theatre and / or television after the airing of the last episode of Opération-Mystère:
- Luce Guilbeault was an actress and director,
- Marcel Cabay was an actor and scriptwriter,
- Georges Groulx was an actor,
- Louise Marleau was an actress, and
- Hervé Brousseau was an actor, television host and singer.
It is with regret that I must point out that only Marleau was still with us in 2019.

Other well-known Québec actresses and actors were part of Opération-Mystère’s cast. Let me mention
- Yvette Brind’Amour, actress,
- Yvon Dufour, actor,
- Pierre Dufresne, actor,
- Hélène Loiselle, actress,
- Gérard Poirier, actor and director, and
- Claude Préfontaine, actor.
It is again with regret that I must point out that only Poirier was still with us in 2019.

Yours truly having nothing else to add on Opération-Mystère, I wish you a good wind and a good week.

And no, I did not mention the irreplaceable collection of the Canada Aviation and Space Museum of Ottawa, Ontario, in this article. Sorry, boss lady. Sorry, EG. Sorry, EP.

I’m just not sure this vehicle was well thought through: The Moon car of astronautic pioneer Hermann Julius Oberth

Though April showers may come your way, they bring the flowers that bloom in May: Frank Atfield and the pretty flowers of Canadian Pacific Railway Company 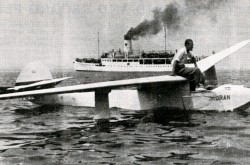 Though April showers may come your way, they bring the flowers that bloom in May: Frank Atfield and the pretty flowers of Canadian Pacific Railway Company