A Sikorsky HO3S of the U.S. Navy conducting a rescue exercise with a dummy aviator. CASM, negative number 32049.

Welcome back, my reading friend, and relax. This won’t hurt a bit. The story of the Sikorsky S-51 began in December 1942 when the Vought-Sikorsky Aircraft Division of United Aircraft Corporation, a giant in the American aircraft industry, set out to design an observation helicopter for the U.S. Army Air Forces (USAAF) and the United Kingdom’s Royal Air Force. The new machine, the VS-327, was to be superior in performance to the Sikorsky R-4, the very first helicopter put in series production anywhere in the world. And yes, the Canada Aviation and Space Museum has an R-4 in its collection. Stored since its acquisition, back in 1983, this incomplete USAAF machine has no Canadian history or significance whatsoever. One could argue it is a good candidate for deaccession, but I digress.

The prototype of the new two-seat helicopter, re-designated S-48 when the Sikorsky Aircraft Division regained its autonomy within United Aircraft, flew in August 1943. A three-seat production version known as the R-5, its USAAF designation, entered service a couple of years later, as a rescue machine. The production run of this helicopter was curtailed when the contract was cancelled at the end of the Second World War.

It is worth noting that the crew of a pre-production R-5 completed the first civilian rescue by a helicopter, in November 1945, in Connecticut, when it picked up two men from a stranded barge. Eager to test the new helicopter, the U.S. Navy obtained a few R-5s, which received the designation HO2S. One of these may have been used to test an airborne sonar set, in March 1946 – a revolutionary development in the history of anti-submarine warfare as sonar-equipped helicopters could attack submerged submarines well away from the ships they flew from. The pilot involved in these trials was one Stewart Graham, who should not be confused with Stuart Graham, Canada’s first bush pilot, back in 1919.

The four-seat S-51, a company-funded civilian development of the S-48, took to the sky in February 1946. In August, Helicopter Air Transport, Incorporated received the first helicopter ordered by a civilian operator. Soon after, a senator seeking re-election, Howard Alexander Smith, contacted the company, thus becoming the first politician ever to use a helicopter. He won, as did Lyndon Baines Johnson, a future president of the United States whose 1948 senatorial campaign success owed a great deal to the flights made in two helicopters, one of which was an S-51. In October 1947, Los Angeles Airways, Incorporated inaugurated the world’s first regular helicopter mail service. Its specially equipped S-51s were the first helicopters certified for instrument flying. The world’s first scheduled and sustained helicopter passenger services, on the other hand, seemingly began in the United Kingdom, in May and June 1950, with American-made S-51s. They were set up by government-owned British European Airways Corporation.

The S-51 also played a significant role in the evolution of aerial application of pesticides. That story began in the United Kingdom in early 1948 when an S-51, informally known as the Spraycopter, was fitted with a spraying gear developed by Pest Control Limited and Westland Aircraft Limited, a company that owned the British production rights for Sikorsky helicopters. In mid 1948, the former launched the first helicopter spraying operation in the United Kingdom if not Europe and the one of first in the Commonwealth. The first flight of a helicopter in Africa was seemingly made by a Pest Control pilot, in October 1948, in Khartoum, Anglo-Egyptian Sudan. To save time, the company asked a British airline to fly a disassembled S-51 to that territory in the fall 1949 – another world first. The harsh weather conditions led to the very first night time spraying flights made by a helicopter – a dangerous experiment if there ever was one.

Both the U.S. Air Force, formed out of the USAAF in September 1947, and the U.S. Navy were duly impressed by the S-51. The latter bought a few to support an Antarctic expedition, for example. The first helicopter flight on that continent took place on Christmas Day 1946. An S-51 owned by the Sikorsky Aircraft Division was on hand, in February 1947, when a U.S. Navy aircraft on approach suffered an engine failure and crashed near an aircraft carrier. Its crew saved the two men on board, thus completing the first naval rescue mission performed by a helicopter.

As time went by, both the U.S. Air Force and the U.S. Navy ordered improved versions of the S-51. Respectively known as H-5s and HO3Ss, these helicopters were mainly used for rescue work. The bravery of their crews throughout the Korean War was greatly appreciated by combat pilots. A 1954 movie, The Bridges at Toko-Ri, goes into that story in much detail. Another Sikorsky helicopter can be seen in Them!, also released in 1954, one of the first movies built around monsters, in this case giant ants, created by nuclear tests. Leonard Simon Nimoy, better known as Spock in the Star Trek universe, played a U.S. Army sergeant (?) in this science fiction classic.

With better performing helicopters gradually entering service, the H-5s and HO3Ss were relegated to training duties. Many of them also ended up on the civilian market.

Like some small helicopters of its time, the S-51 suffered from centre of gravity issues. When flown by a pilot alone, no less than six metal weights were carried in the front of the cabin. Two of these weights were moved aft for each additional person carried. If the weather got too hot, which reduced the lifting capability of the S-51, one or more weights were often left behind. This could lead to some problems if the weights could not be recovered later on. In such cases, pilots sometimes had to carry heavy rocks to keep the centre of gravity of their helicopter in the right place. Flying in rainy conditions also proved challenging since the curvature of the Plexiglas panels of the cabin prevented the installation of windscreen wipers. 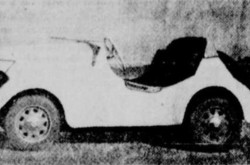