Photo Credit
Kevin Rawlings
At Environment and Climate Change Canada (ECCC), scientists work to understand climate change, how it is impacting Canada now and into the future.

The cold facts on a warming Arctic

As an Arctic nation, Canada has a vested interest in what happens in the far North. Despite the fact that very little pollution is produced locally, the Arctic is warming three times faster than the global average (up 2.3 C so far) [Bush and Lemmen, 2019]. This rate of warming is driving many changes to the Arctic environment, which poses challenges for local Indigenous communities and Arctic wildlife. Canada’s Changing Climate Report describes how the Canadian environment has changed over the last several decades, and what Canadians can expect as the climate continues to warm. Some of the biggest impacts on the Canadian environment will take place in the North.

It’s not just those who live in the Arctic that will experience the impacts. The warming Arctic will worsen climate change for everyone globally. This is because the increased melting of Arctic sea ice and snow cover allows the darker ocean and land surface to be increasingly exposed. This reduces Earth’s albedo — making it less reflective of the Sun’s rays — causing it to warm up further, like a black shirt on a sunny day. Furthermore, as the normally-permanently frozen tundra of the Arctic (“permafrost”) starts to thaw, it can release large amounts of methane — another potent greenhouse gas. The release of methane into the atmosphere, along with the decreased albedo, causes a feedback loop of even more warming. What is causing the Arctic to warm? Carbon dioxide (CO2) is the biggest cause of climate change world-wide, since burning coal, oil, and gas all eventually gets converted to CO2. In addition, methane, carbon monoxide, and all other carbon-containing pollutants eventually evolve into CO2 in the atmosphere through chemical reactions. Once in the atmosphere, CO2 can linger for centuries (its “lifetime” in the atmosphere). So it’s very hard to get rid of CO2 once it’s been emitted. In fact, if all human-caused CO2 emissions suddenly stopped, atmospheric CO2 concentrations and global temperatures would remain high for decades before they started to go down.

On the other hand, short-lived climate pollutants (SLCPs) are air pollutants that contribute to global warming, but they do not stay in the atmosphere as long as CO2. For example, methane’s lifetime is only about 10 years in the atmosphere — short compared to that of CO2! If you “turned off” all methane sources, you would begin to see a positive impact on climate in just a few years. That’s why methane is an SLCP.

Soot (like that found in your fireplace) is also known as “black carbon” and is an SLCP. Its lifetime in the air is even shorter than methane — just one week! Despite its short lifetime in the atmosphere, soot can still be transported to the Arctic from distant sources. In the Arctic, soot is deposited on snow, which makes the snow darker, also reducing albedo. The dark particles on the snow absorb heat from the sun, thus warming the surface and accelerating the rate at which the snow melts. Like methane, if you “turned off” all soot emissions, you would begin to see a cooling effect on climate in the near-term.

How to cool down the Arctic The figure above is from the United Nations Environment Programme and World Meteorological Organization’s 2011 Integrated Assessment of Black Carbon and Tropospheric Ozone. It shows the global average temperature change relative to the pre-industrial average over time (black line), and projections into the future (coloured lines) if emissions reductions were to occur. The purple line shows the temperature increase if nothing new is done; the Arctic would be 2.7 C warmer! The red line shows what would happen if just CO2 gets reduced; no temperature impact for the first 30 years! The blue line shows what would happen if just SLCPs, methane and black carbon, get reduced; a near immediate reduction in the warming, but with temperatures continuing to rise past the two degree mark after about 30 years. The green line shows the best case scenario; both CO2 and SLCP emissions are reduced resulting in quick reductions in warming in the near term, and further reductions in warming — moving towards stable temperatures — in the longer term.

You can help reduce SLCPs

So what can we do to reduce warming in the Arctic? You might think that, as someone who doesn’t live near there, there is nothing that you can do. But there is! The figure below shows the types of emissions and by how much they are warming the Arctic. Since emissions from populated areas get transported to the Arctic, individual action can make a difference. Ships travelling through Arctic waterways are one of the few sources of SLCPs that emit pollution directly into the Arctic atmosphere. Other major sources of SLCPs to the Arctic tend to be located much further south (i.e., in the mid-latitudes). Non-electric vehicle emissions — particularly from diesel vehicles — are a source of SLCP emissions, as are emissions from residential heating (e.g., a gas furnace, wood burning fireplace, etc.), cooking, and food waste that doesn’t go into the compost. These are the emissions that individuals have a good amount of control over.

Forest fires are another major source of SLCPs, but individuals can also have an impact on the frequency of these fires, since many forest fires get started by careless or unsafe fire practices. For example, in British Columbia, 40-95 percent of wildfires are human-caused.

Industry such as coal, oil, and gas (including those that use those fuels in large quantity) and agriculture are major sources of SLCPs, too. Conserving energy wherever possible and reducing meat consumption can reduce the demand from these sectors, and allows individuals to influence their emissions. Finally, individuals can communicate to decision makers their desire for the creation and enforcement of meaningful environmental protection. What are governments doing to help?

At Environment and Climate Change Canada (ECCC), scientists work to understand climate change, how it is impacting Canada now and into the future. The department runs a network of stations that measure levels of SLCPs across Canada, such as at the Dr. Neil Trivett Global Atmosphere Watch Observatory at Alert, Nunavut (photo above). ECCC scientists also develop and run computer models that simulate the climate system, to predict how emissions of SLCPs and greenhouse gases from different countries and emission sources impact Arctic temperatures. This information is used to support evidence-based decision making.

Canadian scientists do not work in isolation; they work with scientists all over the world through global and international networks in order to do the best science possible. For example, ECCC scientists are part of an expert working group on SLCPs under the Arctic Monitoring and Assessment Programme (AMAP). This group is comprised of members from eight Arctic countries* and five “Arctic observer” countries,** nations that are not situated near the Arctic, but have a vested interest in the issues. This expert working group is currently working on the next AMAP assessment report on SLCPs, which will be presented to the Arctic Council at their next major meeting in spring 2021. This will be a significant milestone, as the Arctic Council is a high level intergovernmental group that has the power to make important decisions affecting the Arctic and the world. After the last AMAP assessment reports [AMAP assessment: Black carbon and methane] were released in 2015, the Arctic Council agreed to reduce black carbon emissions by 25 to 33 percent below 2013 levels by 2025. Some of these reductions are already underway through improved technologies and practices in industry, transportation, and waste management, but there is still plenty of work to do at all levels of participation!

* The 8 Arctic states are: Canada, Denmark, Finland, Iceland, Norway, the Russian Federation, the United States, and Sweden.
**The 5 observer states are: France, India, Italy, Spain, and the United Kingdom

If you’d like to take action on climate change, there are ways you can reduce emissions of both SLCPs and CO2: 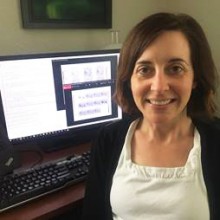 Cyndi is a Research Scientist in Environment and Climate Change Canada’s Climate Research Division. She specializes in air pollution simulations in climate and air quality models, after having done her PhD at the University of Toronto in atmospheric physics. She currently lives in Victoria, BC with her partner and 8-year-old son. When away from her desk, she can be found gardening, biking around Victoria or exploring one of the many beaches nearby. 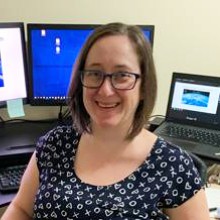 Felicia is a Senior Program Advisor at Environment Climate Change Canada. While she is now providing strategic advice on research program delivery to the department’s Watershed Hydrology and Ecology Division, her education was in the physics and chemistry of the atmosphere. Felicia earned a PhD in physics at the University of Toronto, where she was frequently engaged in teaching and science outreach. She currently lives with her partner in Victoria, BC and spends much of her free time exploring the beautiful Vancouver Island.