October 27, 2018 marks the centenary since William George Barker, a Canadian Wing Commander, flew along over the Forêt de Mormal in France on his way back to England. Major Barker engaged successive formations of German aircraft, and after shooting down an enemy two-seater, he was attacked by a fighter and suffered a wound in his thigh. Barker then found himself surrounded by enemy fighters and was again severely wounded. Nevertheless, despite his wounds, he succeeded in bringing down three more German aircraft before crashing behind his own lines. For his conduct on this occasion, Major Barker was awarded the Victoria Cross.

Barker was killed in a flying accident at Rockcliffe airport, near Ottawa, on March 12, 1930 — right next to the site where the Canada Aviation and Space Museum sits today. In addition to the Victoria Cross, for his wartime service Barker received the Distinguished Service Order with one bar, and the Military Cross with two bars.

In April 2018, the Canadian Forces School of Aerospace Studies was renamed in honour of Barker, the Commonwealth’s most decorated war hero. Read the speech delivered by the school’s commandant, as he reflects on Barker’s enduring legacy. 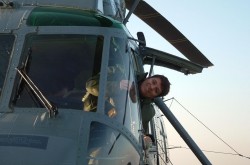