Better beer is in the barley A genetic discovery in wheat may help produce superior barley and tastier beer.

Beer foam stability and off-flavours may not be top of mind for this patio season’s revellers, but it is a concern for beer brewers. Fortunately for them, they have Surinder Singh of McGill University’s plant science department on their side. The PhD student is applying what he’s learned from a groundbreaking wheat project he worked on with CFI-funded researcher, Jaswinder Singh (not related), to identify good barley from bad barley. In more scientific terms, Surinder is working to pinpoint the genetic markers in barley that indicate whether or not it’ll germinate prematurely before harvest time so that farmers and brewers alike can be guaranteed good barley and a good brew.

If barley germinates before it has matured and is ready for harvest, it can’t be processed for beer. If it were, the beer would taste bad and it might be susceptible to mold and a nasty smell — not ideal for even the most novice beer connoisseurs. Germination, Surinder says, requires several environmental factors such as water, warm temperatures, soil and light.

Germination before harvest — what he calls pre-harvest sprouting (PHS) — is often triggered by rainfall or high moisture levels in the air during harvest time. The McGill team discovered that in wheat there are also epigenetic factors that could cause PHS.

Read more about Better beer is in the barley.

Find more stories of research in action on Innovation.ca, the website of the Canada Foundation for Innovation. 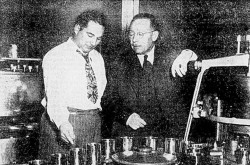