You may have heard the saying, “I’ll believe it when I see it!” However, can we really believe everything that we see, hear, taste, smell and touch? As it turns out, maybe not; it’s easier than you might think to trick your mind into perceiving something that’s not there!

Illusions come from a difference between what’s actually around you, and how it is sensed and perceived by the brain. In some cases, the illusion is caused by contrast. For example, when certain colours are placed adjacent to others, they can look like completely new shades! Other illusions come from the fact that human brains always want to complete patterns. When it looks like there should be a continuation of a pattern – but there isn’t – your brain will fill it in to make it look complete!

For the most part, illusions are just for fun. However, some have practical uses in medicine and psychology. For example, illusions can be used to generate feeling in limbs that aren’t there, leading to development in research for amputees. In psychology, illusions can be used to give researchers insight into how the brain works. For example, one experiment – called the ‘visual cliff’ – placed a clear sheet of acrylic glass over a drop in the floor of several feet. Researchers had infants crawl on the sheet, wondering if they would avoid the drop-off because it looks unsafe, or if they would instead feel the floor and crawl across. The results varied depending on the infant’s age and other factors.

The first psychology lab in Canada was established at the University of Toronto in the late 1800s. There, a researcher named August Kirschmann developed a colour wheel that has a really interesting effect when spun. This wheel was used by researchers to study the principles of colour and how it is perceived, especially how mixed blends of colour create different visual effects. 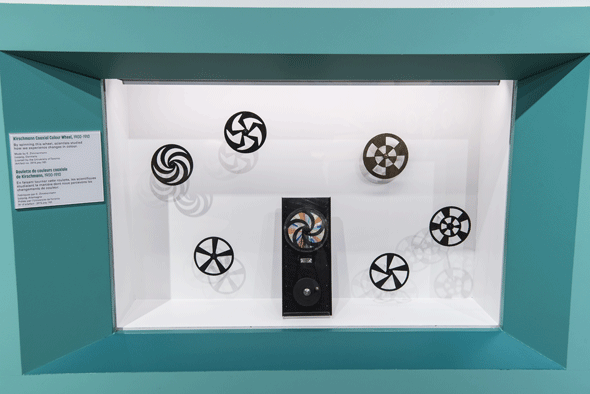 Check out the Crazy Kitchen+ exhibit at the Canada Science and Technology Museum. Discover how your senses and brain can fool you, changing the way you interpret your environment.

Make your own thaumatrope. The thaumatrope has been tricking our eyes since the 1800s. With this toy, you can make two drawings on separate papers merge into one!