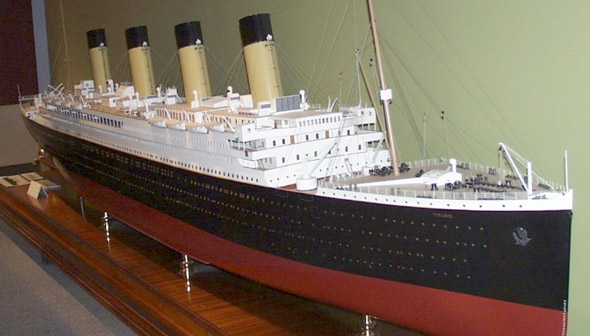 The Museum’s Titanic model was made by Bassett-Lowke Ltd, a company known for building model trains and ships. Wenman Joseph Bassett-Lowke founded the company at the end of the nineteenth century in Northampton, United Kingdom. The company started out delivering low-priced model parts made in the family’s workshop but eventually became a manufacturer and vendor of scale model construction kits. Bassett-Lowke produced both less-detailed toy models and finely crafted scale replicas for serious collectors. It also made models for the Royal Navy and Royal Air Force, which were used for ship identification training, as well as for maritime companies wanting display models of their fleets.

The Museum’s Titanic model was commissioned in 1976 by an undisclosed party, at a time when Bassett-Lowke was owned by Messrs Riley and Derry. It took model maker George Beale 18 months to complete the project. A Canadian military transport plane delivered the model to Canada in 1981, following a route similar to that taken by Titanic 69 years earlier.

At the turn of the twentieth century, the White Star Line commissioned shipbuilders Harland and Wolff to construct three transatlantic passenger liners: Olympic, Britannic, and Titanic. At the time, they were the largest and most luxurious liners ever built, incorporating the latest advances in ship design and navigational technology. Once completed, Titanic was the largest ship afloat and could carry approximately 3,300 passengers and crew.

Titanic’s maiden voyage was uneventful until 11:40 p.m. on April 14, when the ship struck an iceberg and sustained massive damage to her hull. Although there was time to evacuate the ship, there were only enough lifeboats to carry about half of those on-board. Hoping to summon a nearby ship to help rescue passengers, the radio officer sent out distress calls, but the ships that heard the calls were too far away to provide immediate assistance. Only the 700 passengers who made it into the lifeboats survived that night.

The impacts of the sinking of Titanic were many and far-reaching. In response to the tragedy, the international maritime community adopted a series of new safety regulations, including increasing the number of lifeboats required on-board ships and requiring that marine radios be operated 24 hours a day. Several countries also came together to set up an ice patrol along transatlantic shipping lanes, to track and report the position of icebergs.