KDN over the runway numbers landing at RIAT.

I wasn’t sure if I should bow, kneel, or step back, as HRH Prince George, the future King of England approached me. So I just stood my ground, smiled and said “hi’ to him and his parents, as I held the shutter down on my iPhone. Prince William and Princess Catherine had brought George to the Royal International Air Tattoo. KDN had also been invited to attend the event in honour of the Chipmunk 70th Anniversary. Seeing the Royals inspecting the Chipmunk was a highlight.

The planning for our participation started a long time before the event, by our friend, supreme organiser and Chipmunk pilot Carol de Solla Atkin. The paperwork and procedures to fly a civilian aircraft into this military event was daunting. When the time came we were given a 2-minute landing window. We were very nervous about being on time and not screwing up among all the high performance jet traffic inbound at the same time. When we contacted air traffic control my heart sank when a controller answered with a thick Scottish accent. On top of everything, when he used our call sign (G-AKDN), which is said aloud as “Golf Alfa Kilo Delta November”, He said “Golf Delta November”. Another Chipmunk whose call sign ended in (ND) “November Delta “ was also confused and was responding to him when he was calling me. It took me a few calls to realise what was going on and it was stressful. I was cleared from a hold point direct to the “in close downwind position”. Once there, he pointed out an Apache helicopter on short final and said “clear to land behind and keep your speed up, there is an F-16 on final behind you”. After a very quick approach and landing I was instructed to turn around, backtrack and clear. That was quite the view taxiing back on the runway seeing the jet approaching fast. A quick clearing turn off the runway had us front and center to all the 100’s of airplane watchers and photographers. I received some beautiful images of our landing. Good thing I didn’t screw it up.

We were very glad to be on the ground. Lined up with six other Chipmunks our display represented the seven decades of their use. KDN stood out with her civilian finish and garnered a lot of attention over the weekend. We were thrilled to learn KDN was short listed as a finalist in the Concours d’Elegance. This is a very coveted award, and we had to find black tie attire to be able to attend the formal gala ball the following evening, where they make the presentations. We scrounged up some clothes and at the end of the airshow day we changed out of our flight suits in a shipping container where they stored all the display pilot’s helmets, parachutes and gear. Hitching a ride across the airport we were greeted like celebrities along with a sea of military brass. We were offered champagne and joined the crowd on the ramp to watch the RAF Regiment Band performing the Queen’s Sunset Parade. This is a precision marching display that was done perfectly. At the last note a Spitfire did a low pass. It was a very moving experience and next to bumping into the Royals it was the highlight of the whole event for me.

We entered a monster hangar that was decorated with black drapes covered with mini white lights looking like stars. On display at the ends of the formal dining room were a Raptor and F-16. The dinner and conversation was excellent and the awards received great applause. We lost out to the Air Cadet Slingsby Glider that had been meticulously restored, and as it was the Air Cadet’s 75 Anniversary and also a RAF Charitable Trust Event, we were humbled to be in the running. We were even more humbled to find KDN had been featured on the souvenir poster!

So after 3 days of listening to jet afterburners, visiting with hundreds of the public and seeing the best military display pilots in the world, we departed as a group of seven Chipmunks and made our way to our separate home bases. Exhausted, sunburned, wind burned, we had 2 days to get ready to attend the Farnborough Airshow. KDN’s arrival there had it’s own memorable moments. Gala Ball at RIAT. I think I will decorate my hangar like this;) KDN featured on the souvenir poster. The show had all the display pilots sign three copies that will get auctioned off to raise funds for the Charitable Trust. KDN featured with some good company. 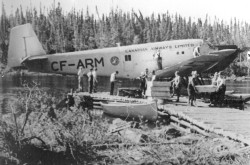 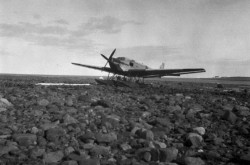 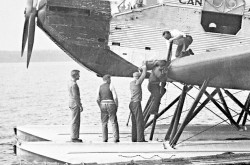 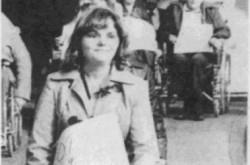