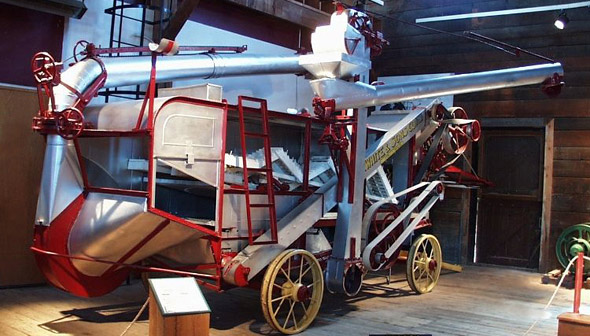 Acquisition from the Ontario Agricultural College in Guelph, Ontario, in 1968

George White immigrated to Canada in 1857 and began making farm implements in London, Ontario. As George White & Sons Company Limited, the firm produced traction engines and threshers for the eastern and western Canadian markets. This White Thresher Model “No. 6” bears serial number 4241FJ. The casing has been cut away to expose the thresher’s mechanical operation, suggesting this machine was used for demonstration and marketing purposes.

The White Thresher No. 6 represents the shift in the early twentieth century to all-metal construction, and suggests how technologies overlap, as threshers remained in production while combine harvesters were becoming more popular. You can view this thresher in operation at http://www.youtube.com/watch?v=NFKlVD4vcWQ.