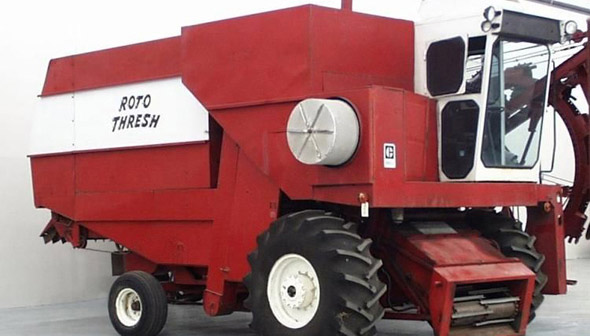 The Roto Thresh was the first combine harvester to use a rotary cleaning system to separate grain from chaff and straw using centrifugal force, a technological innovation still used in combine design today. The rotating cylinder was mounted perpendicular to the header and blew the chaff upwards. The Roto Thresh claimed to harvest 250 to 300 bushels per hour and reduce grain loss.

The Roto Thresh combine was developed, designed, tested, manufactured, and used in Canada. Manitoba farmers Bill and Fred Streich, with the help of Frank McBain and Barney Habicht, developed and produced the first prototype in 1951. They went on to form the Western Roto Thresh Manufacturing Company in 1968 and produced a more advanced prototype in collaboration with the University of Saskatchewan. Roto Thresh began production in 1974, but only fifty machines were manufactured before the company closed in 1978. When the patents expired, large manufacturers such as John Deere adopted and perfected the centrifugal aspirating technology, which is found today on many different combine models.