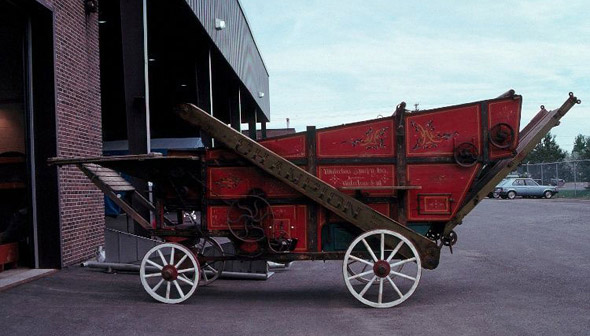 The Waterloo “Champion” Separator, a wood-framed thresher, was first manufactured by Bricker & Company in 1880. The thresher featured grain-separating technology patented in the 1870s by John Beam. In 1888, E. W. B. Snider bought Bricker and incorporated it into the Waterloo Manufacturing Company. In 1908, Waterloo established a manufacturing plant in Portage la Prairie, Manitoba, and continued to produce threshers into the 1940s.

The Waterloo “Champion” was a distinctive thresher with its high rear end and double gear wheels. This thresher is hand-decorated with painted scroll-work and pin-striping, a characteristic of agricultural implements made in the nineteenth century.