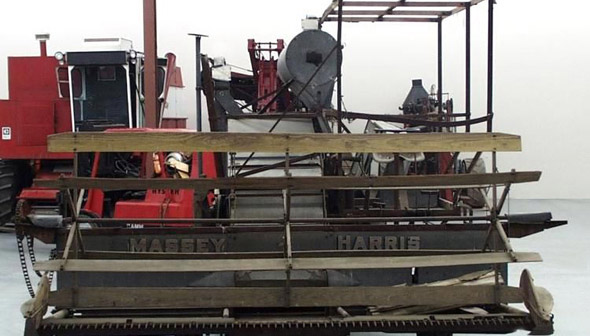 The “No. 21” was first manufactured in 1941 and was the first rubber-tired self-propelled combine harvester. The No. 21 was designed by Australian engineer Tom Carroll, who wanted to create a smaller and more affordable combine than its predecessor, the No. 20. The No. 21 became Massey-Harris’s most popular combine, with 10,000 produced in 1949 alone.

Massey-Harris was founded in Brantford, Ontario, in 1891, the result of the merger of the Massey Manufacturing Co. and A. Harris, Son & Co. Massey-Harris became a globally important manufacturer of agricultural implements. It first began producing the No. 21 during the Second World War when agricultural implement factories were converted to war production. Massey-Harris received permission to produce this combine by proposing that 500 be produced to form a “Harvesting Brigade” that would harvest crops throughout North America. The Brigade began harvesting in the southern United States and moved northward, harvesting more than a million acres in support of the war effort. The Brigade also gave Massey-Harris wider exposure in the United States: by 1947 the company controlled 54 percent of the American combine market.