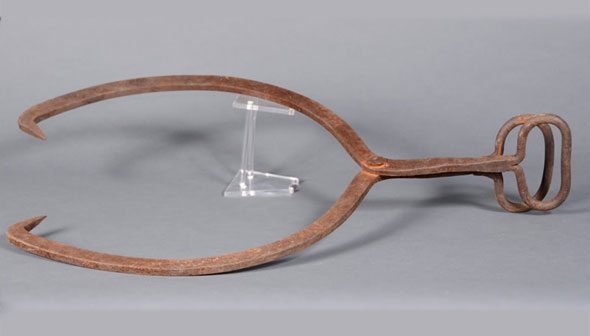 Before refrigerators became popular in the 1950s, food was kept fresh using ice cut from lakes and ponds. After large blocks were cut using an ice saw, these tongs were used to lift them. The ice blocks would be taken to storage. Then, in the summer months, ice sellers would sell smaller blocks for use in home ice boxes.

The Ice Tongs, along with several other agriculture related objects, were purchased in 1974 from a private collector in Peterborough, Ontario.

These iron tongs have a shaped handle with rivets 16.5 centimetres below. The rivets allow the tongs to adjust. They can spread from roughly 12 centimetres to roughly 66 centimetres wide. Each tong has a 3.8-centimetre (1½-inch) hook on the bottom to grip the ice.

The Peter Hamilton Agricultural Works operated in Peterborough from 1848 to 1954. It
was founded by James Hamilton, but after his death, his son Peter took over the business. In 1901, the company was incorporated as the Peter Hamilton Manufacturing Company. The product line included agricultural implements such as mowing machines, horse hay rakes, feed cutters, and ploughs.