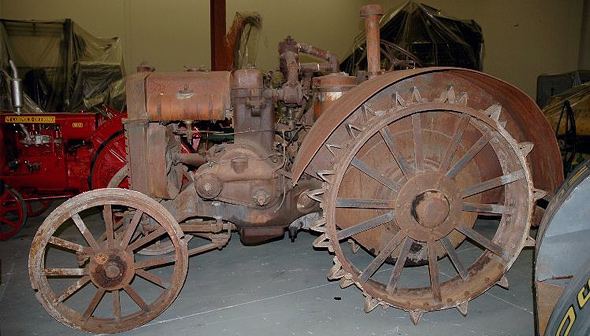 The Case “18-32” tractor was introduced in 1925 and came with a monobloc-constructed engine. This production technique, which cast the entire cylinder block as one unit, reduced costs and made this a more affordable tractor. Another important feature was the placement of the engine parallel to the rear axle, which made it possible to mount the belt pulley directly on the motor crankshaft and eliminate gears and friction. Case produced more than 9,800 18-32 tractors between 1925 and 1927, before replacing it with the model “K” tractor until 1929. There were no major differences between the two machines, which is why tractors built between 1928 and 1929 are often referred to as model “K 18-32.” This tractor was used near Indian Head, Saskatchewan.