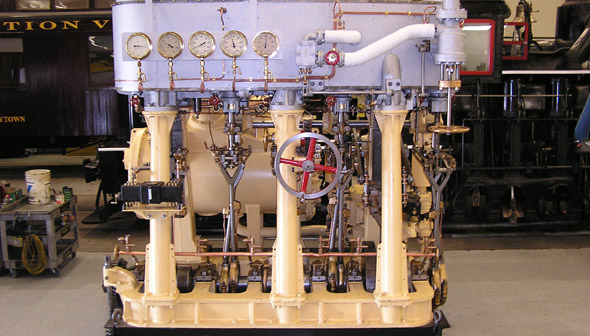 This triple-expansion steam engine powered the Canadian Coast Guard Ship (CCGS) C.P. Edwards from 1946 to 1974. The Coast Guard decommissioned the ship in 1974, scrapping it two years later. The Museum purchased the engine from Marine Transport and Engineering in 1976. Starting in 2005, the engine was the focus of a major two-year restoration project. It was dismantled to repair and clean each piece. Missing and broken pieces were replaced before the engine was reassembled. Now on display, the engine is carefully oiled each day to keep it in working order.

This 15-ton steam engine powered the CCGS C.P. Edwards from 1946 to 1976. Built by Collingwood Shipyards, the C.P. Edwards was intended as a military supply ship for service in the South China Sea during the Second World War. Though never used in war, the Canadian government put the C.P. Edwards and its engine to good use as a lighthouse and buoy tender. Because Canada has the longest coastline in the world and depends on maritime trade for its prosperity, the government has to maintain a large network of aids to navigation to ensure safe transit of ships in and out of Canadian harbours. The C.P. Edwards was one of many Coast Guard ships used to service those aids to navigation.