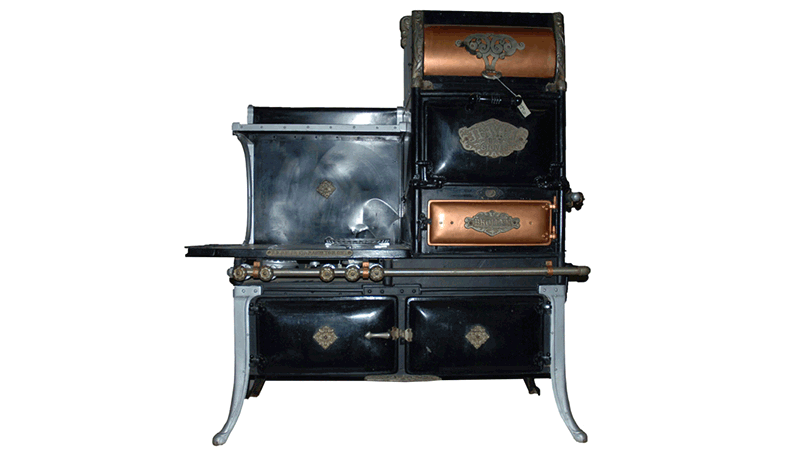 This range initially belonged to an Ottawa resident, who used it until 1964. It was then stored in a cellar for eight years, and was bequeathed to the Consumers’ Gas Company in 1972. The Museum acquired the range in 1998 as part of its Consumers’ Gas collection.

This is an example of the highly ornamental gas ranges made by the well-known Canadian firm Burrow, Stewart & Milne Co. The manufacturer also produced scales, furnaces, carriages, and saddlery hardware. The company was very successful and, by the time this range was made, had over 300 employees. The range features compartments for cooking, warming, and storing food, along with four gas burners. Its four legs, the top warming shelves, and the ornamental removable side extension are typical of the free-standing ranges found in early twentieth-century kitchens.

Burrow, Stewart & Milne Co. was established in 1864 in Hamilton, Ontario. In the early 1900s, it manufactured an entire line of appliances under the name "Jewel", and marketed its products as not only having superior technological quality but also being more aesthetically pleasing than those made by the competition.

This "Jewel" range, made around 1916, is in relatively good condition and appears to have been refinished. The cooking surfaces, along with the interior walls of the oven and the broiler, were painted silver, probably by the owner. Conservators removed a heavy layer of dust that had accumulated on the range over time, and repaired minor spots of corrosion.