It can be hard to imagine the rock cycle in action — after all, it takes millions of years for it to complete! However, it doesn’t take nearly as long for crayons to do the same thing. Take a look at how crayons react to how the Earth molds the world’s rocks.

Adult supervision may be needed when handling a grater and boiling water.

You can repeat the cycle once more, now that you have regenerated your igneous rock. Or instead, do the cycle backward — see if you can go from igneous to metamorphic and then to sedimentary.

There are three types of rock: igneous, sedimentary, and metamorphic.

The Earth catalyzes all of these reactions naturally. Through natural weathering processes like ocean waves, sediments are eroded from igneous and metamorphic rocks so that sedimentary rocks can be formed. The immense heat and pressure needed to make metamorphic rocks comes from deep under the Earth’s outer layer, the crust. The conditions required to completely liquefy minerals into magma occurs mostly near the top of the asthenosphere layer of the Earth. 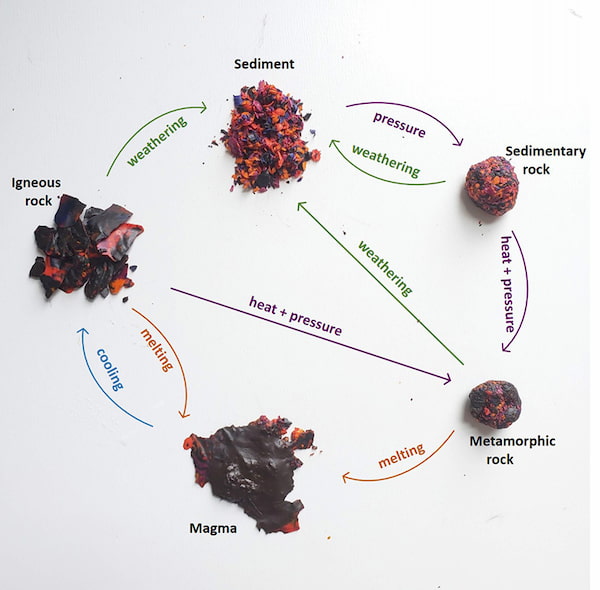 Although the rock cycle can take millions of years to complete, you can see its results in the rocks you collect outside! Use resources online to identify rocks that you’ve collected, and pay close attention to which kind of rocks they are. Do you see any external characteristics in common?

When cooling your igneous crayon rock, instead of leaving it out to cool naturally, plunge it into a bowl of ice water. What happens?

Real igneous rocks can either cool deep within the Earth, or near the surface of the crust. Just like when you left your crayon rock to cool on the table, when rocks cool inside the Earth, it is much hotter. This means that the crystals that form in the rock are much bigger, and the rock is called intrusive. In contrast, just like plunging it in the cold ice water, igneous rocks can cool near the colder surface of the Earth. The crystals are formed much quicker, so they are much smaller. These rocks are called extrusive.