Simple machines are all around us. They help us do so many of our daily tasks, from drawing your blinds in the morning to screwing the cap onto your water bottle. Their purpose is to reduce the amount of force needed to do work. Basically, what this means is they make it easier for us to move and do things.

There are six types of simple machines. All simple machines are modifications of either the inclined plane or the lever. The inclined plane, along with its derivatives (the wedge and screw), use a sloping surface to accomplish their tasks. The lever, along with its derivatives (the wheel and pulley), use a force that changes direction at a pivot point to do work.

Work depends on both distance and force. Simple machines affect the inputted work by either:

The measure of how much a simple machine helps is called the mechanical advantage.

Levers help you to lift more weight than you could on your own. A lever is a rigid “arm” — a flat board — with a pivot point called a fulcrum in the middle. When you push down on one side (the force side) of the lever, the other side (the load side) lifts. The longer the board, the easier it is to lift up a heavy object on the other side. There are three types of levers: 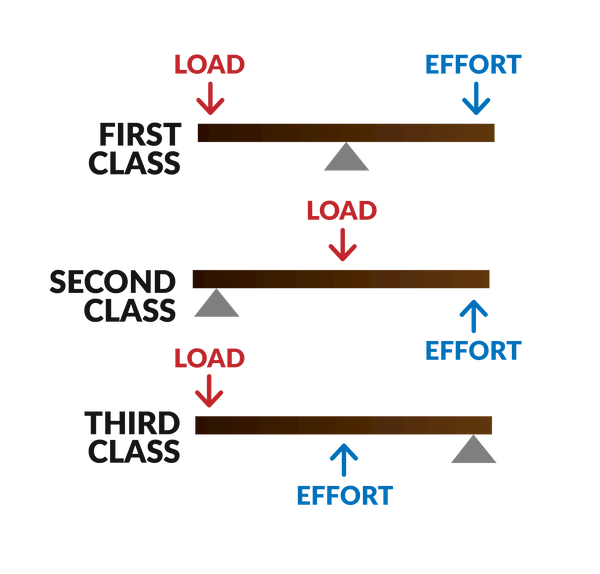 A wheel and axle is a modification of a first class lever. The fulcrum becomes the axle, and the arm is repeated many times to make the spokes of a wheel. This allows for 360-degree rotation. While the wheel is clearly found in transportation devices like cars, it also makes up less obvious machines like rolling pins. 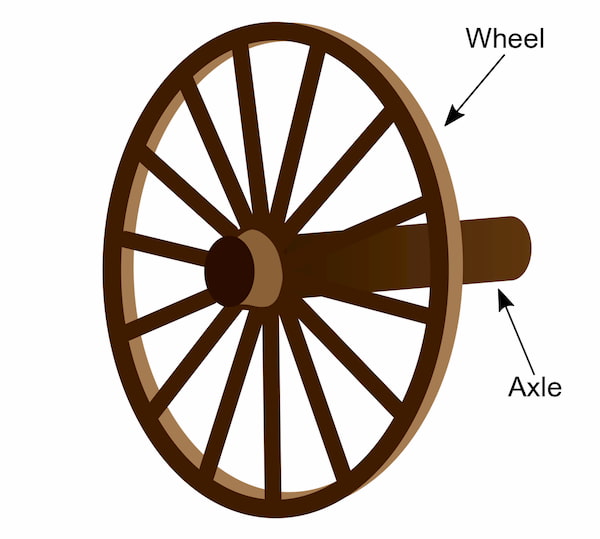 A pulley is a wheel that has a groove for a rope. Just like a wheel and axle, it is a type of first class lever. You pull down on one side of the rope to lift the load side, and the pulley makes it easier than it would be to just lift the load alone. Multiple pulleys in a system lighten the load even further. Cranes and elevators use multiple pulleys to lift or lower heavy objects or people. 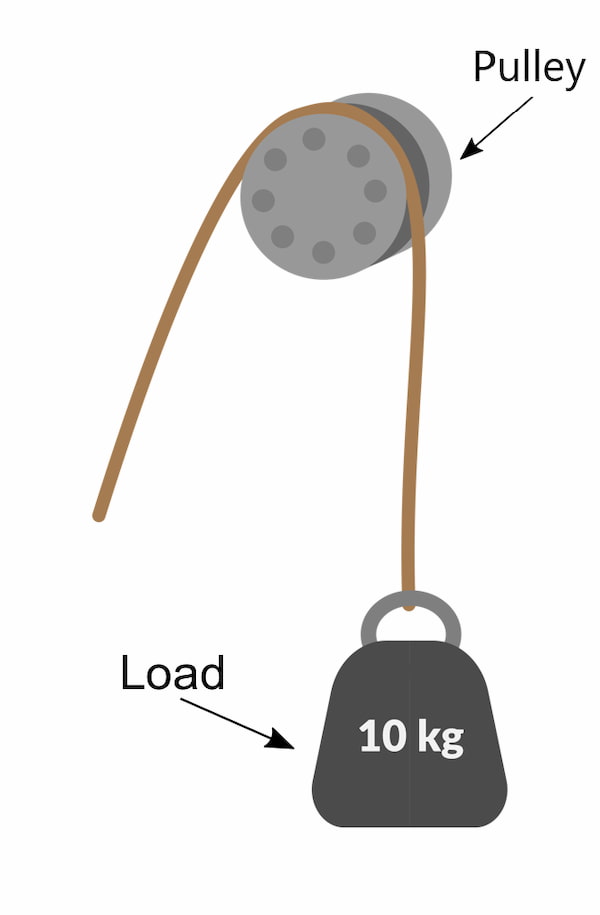 The inclined plane is a ramp. Pushing something up a slope is much easier than just lifting it.  This is because work is a function of both distance and force. Inclined planes make the distance travelled a little longer, but makes it easier to move. 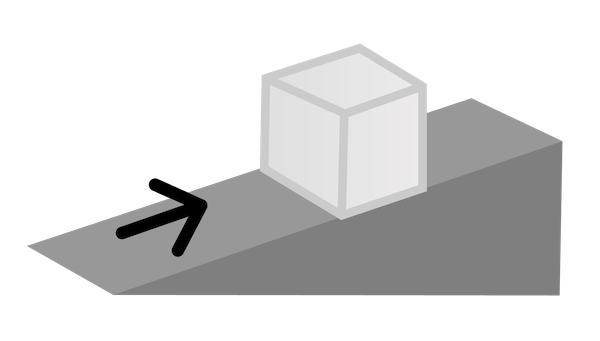 A wedge is essentially two inclined planes attached back-to-back. Wedges are used to push something apart, like an axe chopping wood. The downward force is pushed outward on either side. 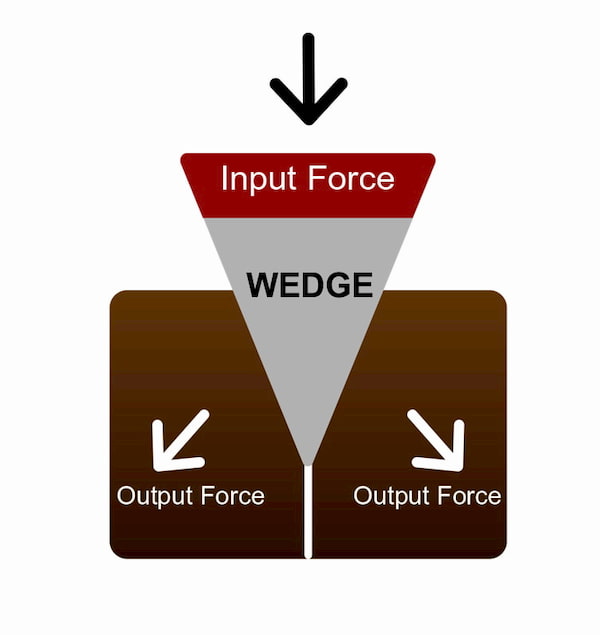 A screw is an inclined plane wrapped around a cylinder. The ridges made by this wrapping keep screws firmly inside materials. By spinning a screw with a screwdriver, you change the direction of the spinning motion into a vertical force. As well, the length of the screwdriver turning it matters. Because a screwdriver is just a type of lever, the longer the screwdriver, the bigger the mechanical advantage. Lastly, more tightly-coiled screws take more force to screw, but are able to screw on tighter due to the increased surface area. 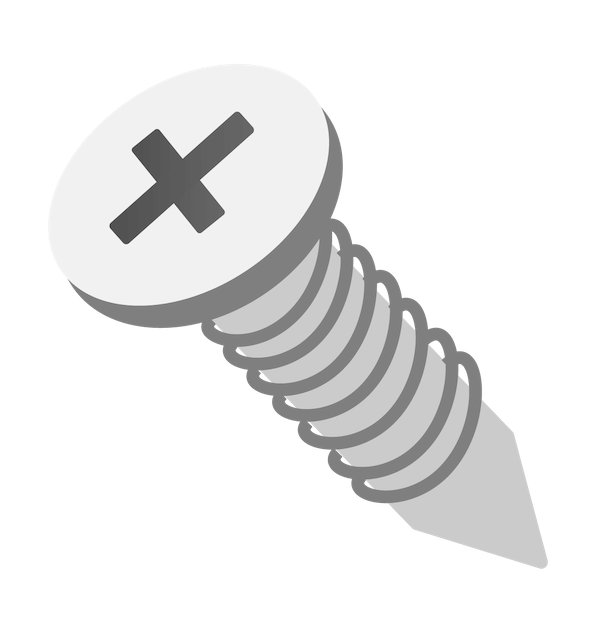 Many of the objects we use regularly are simple machines. Doors are levers, screws hold your desk together, and blinds are lifted with a pulley. Some machines we use every day seem a little more complicated, but they too contain simple machines working together! A wheelbarrow makes use of a lever and wheels, a construction crane uses a lever and pulleys, and a bicycle has wheels, pulleys, gears, levers, and screws. Without these machines, innovation would not be where it is today.

For a screw to enter into a hard material like wood, it needs to be turned using a screwdriver. For a long time, screwdrivers had a flat head which sat inside an indented straight line in the screw’s head. Unfortunately, this design often led to screwdrivers slipping out, slowing the process significantly. Peter Robertson, a Canadian, invented the Robertson screw in 1908 as a solution. The indent in the head and the tip of the screwdriver are squares, leading to less slippage. Today, this model is still widely used in Canada.