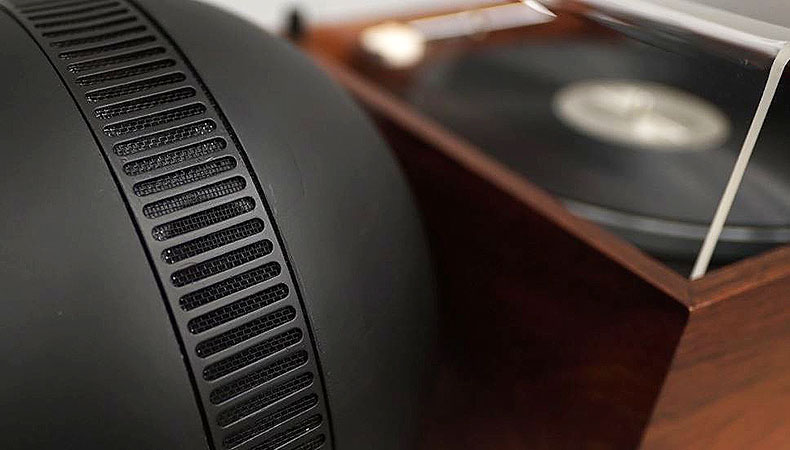 The Clairtone G2 (1966) was the second generation of Clairtone Sound Corporation Ltd.’s stylish and technologically advanced Project G series of stereo hi-fis. Designed and manufactured in Canada, the Clairtone G2 was at the forefront of modern 1960s design, mixing classic and modern materials with state-of-the-art audio engineering. An iconic feature of the Clairtone Project G2 was its spherical sound globe speakers, which could be rotated 360 degrees—or removed and mounted on external bookshelf speaker stands—to achieve an optimal sound experience in any listening room.

Designing a Modern Hi-Fi Icon: a Brief History of Clairtone

The Clairtone Sound Corporation was established in 1958 by Peter Munk and David Gilmour in Toronto. The aim of the company was to merge contemporary Scandinavian design with high-fidelity audio equipment made in Canada. This marriage of design and electronics was not happenstance. Gilmour was already an established importer of Scandinavian design pieces and was tuned into the modernist styles that would soon become emblematic of 1960s design, while Munk was an electrical engineer who had already developed a number of high quality hi-fi sets for private clients.

The first hi-fi system produced by Clairtone, the 100-S (1958), successfully realized the dual vision of its founders. It was well-received by the hi-fi community and was awarded a 1959 design award from the Canadian National Industrial Design Council. Yet while the futuristic profile of the 100-S impressed the design community, many consumers still pined for hi-fi cabinets of more conventional styling. To remain competitive in an increasingly crowded market, Clairtone felt obliged to temporarily abandon their modernist preferences in favour of creating a series of more traditional hi-fi cabinets inspired by Italian and French provincial design.

Eager to return to their preferred Scandinavian-inspired aesthetic, David Gilmour and Peter Munk began development of a new hi-fi design—which would become the Clairtone Project G—in 1964. The design project fell chiefly to Hugh Spencer, a prominent designer of the period, who was tasked with producing a statement piece that could be used in promotional campaigns for the company. Munk was responsible for developing a custom audio system that would work within the cabinet’s unique physical design. The resulting hi-fi was named the Project G after its signature “globe” speakers, which were designed to outperform many of the best loudspeakers on the market while looking like nothing else available at the time.

The Project G was a critical success and attracted significant attention for the company, earning endorsements by celebrity musicians like Oscar Peterson, Dizzy Gillespie, and Frank Sinatra, and resulting in cameos in popular films like Marriage on the Rocks (1965) and The Graduate (1967). Its comparatively bulky size and high cost, however—$1,850 CAD, about as much as a small car of the period—ultimately limited its commercial potential. This lead Munk and Gilmour to explore the idea of producing a sleeker and more affordable version aimed at a broader consumer market. To achieve this goal, Clairtone called upon the industrial design expertise of Al Faux (pronounced “fox”). His task was to maintain the aesthetic of the Project G—straight lines, metallic and wooden materials,  globe speakers—but repackage these components within a smaller and sleeker frame, incorporating new electronic components which made the system more streamlined while also maintaining its high quality of sound. The result was the introduction of the Clairtone G2 in 1966.

Priced at $950 CAD, less than half the cost of the original Project G, the Clairtone G2 was a more affordable option for those hi-fi consumers wishing to be on the cutting-edge of modern design. The more compact size and removable globe speakers of the Clairtone G2 also made it more easily moveable and adaptable to apartments and smaller listening rooms. Like its predecessor, the Clairtone G2 won several awards, including the Canada Design ’67 Award of Excellence for originality and design. Today, the Clairtone G2 remains one of the most iconic and coveted examples of mid-century modern hi-fi design worldwide.