Sharing Our Innovation: "The Relens" In 2017, students from Hagersville Elementary School in Ontario worked in teams to design, develop and share Innovation Projects. One team of young innovators created ‘The Relens’.

After the field trip, one of the teams of students comprised of Isla, Ryerson and Eddie, continued to enthusiastically create what would become a model for the Education for Innovation (E4I) resources. These three young innovators spent weeks working through the Innovation Cycle. Together they inquired about Canadian innovations in communication where they learned about the telephone, the pager, the walkie-talkie and the BlackBerry. They then applied their inquiry to an idea of their own – an innovative communication device entitled The Relens! The Relens is a repurposed BlackBerry with some pretty cool features which you may be able to figure out if you think about the name of the innovation. (Read the speech below for the cool features.)

Once the idea for The Relens was developed, the three innovators began to incubate their innovation idea. They started to build a prototype of the Relens, as well as pitch their idea to others - even to Tom Jenkins! Wow! After they received some helpful feedback, they began to implement their design. Together they innovated their own business, using a poster board to showcase all of their great ideas. It is important to remember that while The Relens was developed, the three innovators always thought about the impact that their innovation would make. From the very beginning, The Relens needed to be a phone that would be cheap, effective and would reduce technology waste.

To help determine their impact as well as share their innovation, the three innovators received the opportunity that every innovator dreams of… they were invited to share their idea with the 28th Governor General of Canada, David Johnston! They also received a special invitation to their school board’s year-end meeting. These innovators were asked to share their experiences and explain why they felt innovation was important to teach in schools. These three innovators not only made an impact by creating the concept for an environmentally friendly innovation, they also made a true impact in their local community by inspiring other schools to bring innovation into their classrooms.

These three innovators have had a fun and exciting time developing, sharing and watching their innovation come to life. At 8 and 9 years old, Ryerson, Eddie and Isla are already making a difference, inspiring others to reach for the stars! Everyone can be an innovator and we encourage you to develop your own ideas and put them into action!

To get to know more about Ryerson, Eddie and Isla’s Innovation Project, check out their presentation shown below, as well as some pictures of their innovation process.

Hello! We would like to talk to you about our innovation, the Relens.

The Relens is a cellphone that reuses different parts of old BlackBerrys and other cell phones to innovate something even better. At our store, we like to innovate each BlackBerry to make it better by adding a removable camera and an emoji bar that lets you pick your favourite emoji in a hurry.

When were talking about BlackBerrys and recycling, we wanted to make a phone better so we thought of the Relens. To make the Relens, it took a lot of planning and working together. Some of our ideas stayed the same, but others changed like the name and the price.

When we were planning how we would start the business we were so excited that we were dancing! We planned how we would sell the Relens. We decided to make it cheap so it’s $70. This is for shipping, installing, and the product. We also had to make our store, which is at 88 Innovate Street. Our phone number is 289-123-5551.

Our goal for the Relens in the future is to innovate with even more electronics and to keep reducing, reusing and recycling, We want to do this because we want to make a positive impact in Canada that is also good for our environment.

Thank you for reading our speech we hope that you will keep innovating like us! 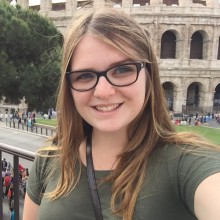 I am a 5th year Nipissing student who is passionate about teaching and lifelong learning. One of my newest and most enthusiastic interests is Innovation! I believe that when we give students the opportunity to truly be creative, innovative ideas will follow.