The University of British Columbia’s Jörg Bohlmann has helped sequence the genome of Canada’s most economically important tree, and his research could contribute to the protection of the boreal forest from the devastating threat of the mountain pine beetle

OnJörg Bohlmann’s first day as a post-doctoral fellow at Washington State University in 1995, his supervisor asked for a favour. Would he take a few months off his proposed study — researching the genetics of antimicrobial menthol found in peppermint — to help identify genes involved in the chemical defences of conifer trees? He reluctantly agreed.

“Twenty years later, I’m still fascinated working on conifer trees,” laughs German-born Bohlmann, who came to The University of British Columbia (UBC) in 2000. Since then, working in the CFI-funded Michael Smith Laboratories on the UBC campus in Vancouver, British Columbia (B.C.), and with Canada’s Michael Smith Genome Sciences Centre, also funded by the CFI, Bohlmann has made several key contributions to forest genomics. In May 2013, he was part of the team that was the first in the world to sequence the genome of the white spruce, the Canadian forest industry’s most economically important tree. The breakthrough has the potential to accelerate tree-breeding programs to maximize certain traits that are desirable for the forest industry, such as insect resistance and high wood quality.

Bohlmann’s work has also been pivotal in helping solve two fundamental mysteries behind B.C.’s mountain pine beetle epidemic. Since the early 1990s, the mountain pine beetle, a native species to B.C., has proliferated, in part, because of many successive warm winters, devouring its way through more than 18 million hectares — an area five times the size of Vancouver Island — of prime lodgepole pine, the dominant pine species in the province’s interior.

Bohlmann and his partners were the first to develop well-assembled genome sequences for both the beetle and the blue stain fungus, which works in concert with the beetle by spreading from tree to tree on the insect’s head and shutting down the tree’s natural defences, allowing the beetle to devour it. Bohlmann’s research team also identified some of the specific genes that enable the beetle and fungus to enter a living tree and short-circuit its natural defences.

As the beetle exhausted its lodgepole pine food supply in B.C., the big question became whether it would spread into and beyond Alberta by adapting to Jack pine, the dominant pine species of Canada’s boreal forest, and make its way eastward to the Atlantic coast. The team’s research was instrumental in developing genomic markers that confirmed, in 2011, that some trees killed in Alberta by the mountain pine beetle were, in fact, hybrids of lodgepole pine and Jack pine, sounding the alarm that the mountain pine beetle threat to Jack pine — and Canada’s boreal forest — is real. “Based on this work,” says Bohlmann, “Alberta and Saskatchewan have joined forces on an action plan to cope with this threat.” 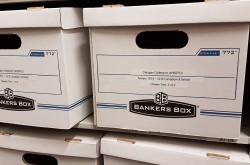 Archives Awareness Week 2022 - no tours yet, but try…archival shelf bingo! 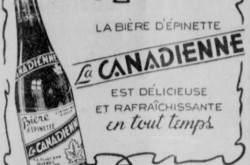 A small beer which was no small beer: F.A. Fluet Enregistré of Québec, Québec, and La Canadienne spruce beer