Dr. Elizabeth Cannon has a passion for accuracy, and it’s this fervour that led her creativity and penchant for mathematics to make Canada a leader in satellite navigation. From agriculture to aerospace, Cannon has contributed much to the science of navigation and continues to do so.

Today, Cannon is the president and vice-chancellor of the University of Calgary, as well as the chair of Universities Canada. She started her career at Acadia University, graduating with a B.Sc in mathematics and computer science. Soon after she started working at Nortech Surveys, a seismic surveying and geomatics company in Calgary. Geomatics is the study of the production and management of spatial information. Rapt with this science and the company’s project of developing a new global positioning system (GPS) software, Cannon decided to go back to school.

She studied geomatics to earn yet another B.Sc at the University of Calgary. Soon after, she received an M.Sc. and then a Ph.D. in geomatics engineering. Her research was on precise positioning techniques in airplanes using centimetre-level differential GPS techniques. After completing her studies she joined the University of Calgary as a faculty member, where she went on to become a dean, and now the president of the school.

Cannon’s research covers a diverse range of geomatics related projects. She studied aircraft positioning and attitude determination by the use of GPS antennae mounted on an airplane. This gives accurate positions by the centimeter and attitude accuracies by the few arc-minute level. Precision farming is another area of her research, which involves attaching a GPS device to a yield monitor. The resulting data show where it’s best to apply fertilizer.

She also writes complex algorithms to make positioning as precise as possible. Scientists aim for 10cm2 within 300km2. So the software that positions this needs to take into account errors created by ionospheric and tropospheric interference as well as satellite orbits. She’s coauthored nine GPS software packages that are used by 200 agencies across the globe.

Cannon also has some creative use of technologies. In the past, she’s repurposed cheaper devices for accuracy in navigation. For example, she’s reused odometers, gyros and steering angle sensors as hardware for vehicular stability and to help cars avoid collisions.

Cannon’s international recognition doesn’t end there. In 2001 she became the first woman to earn the Johannes Kepler Award, the most prestigious honour from the U.S Institute of Navigation. We’ve come a long way since 2001. Still, the number of women in engineering throughout Canada is low in contrast to men. Cannon is a mentor to many women throughout the nation and aims to remove the gender gap of women in engineering. 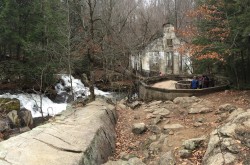