By: Sophie Nakashima
Ingenium – Canada's Museums of Science and Innovation - Thomas Thwaites, Toaster Project: Or a Heroic Attempt to Build a Simple Electric Appliance from Scratch

How often do you stop to admire that cheap plastic appliance that makes your breakfast? While perhaps an unassuming and mundane object of your everyday life, the common toaster holds histories of energy, innovation, and societal change in Canada. As a Master of Industrial Design student completing a Diploma in Curatorial Studies at Carleton University, I was extremely fortunate to work with the Canada Science and Technology Museum as an intern involved in the documentation of their artifacts, namely 34 toasters in the collection. Through this four-month project, I was able to examine the toasters in the Ingenium collection through a research and design lens. What I initially viewed as ordinary objects turned out to hold a rich history, revealing the vital Canadian stories that are woven into their past. The design of the toaster itself evolved through numerous iterations for more than century. The pop-up toaster that we are familiar with today is only one of many ways that toasters have been designed as the product developed. Before the invention of toasters, toast was made by holding bread slices over a fire (Smith, 2020). In 1905, Albert Marsh invented Nichrome, a material that could heat up both rapidly and repeatedly. This was ideal for heating elements in electrical appliances and was widely taken up, including in the design of toasters (National American Museum of History, n.d.). The year 1909 marked the release of the first commercially successful toaster by General Electric (Gross, 2017). The D-12 toaster was little more than a heating element surrounded by wire racks that held bread. You would toast one side of your bread at a time, mindfully attending to your bread and flipping it by hand to toast the other side. Other toasters that began to enter the market featured flip-down doors that held the bread, knobs and buttons that flipped the toast, and sliding platforms that allowed bread to be toasted on two sides at once. The Best Thing Before Sliced Bread

Despite myriad ways to toast bread, everyone continued to face burnt toast as a result of poor time-keeping and negligent toast-turning. In 1921, Charles Strite, a factory worker in Minnesota who had enough of the burnt toast in the cafeteria, patented the pop-up toaster mechanism that we see in our toasters today (Gross, 2017). The Toastmaster, the first pop-up toaster, used a timed spring mechanism to ensure that the toast was ejected and the element was switched off automatically. Pre-sliced bread was introduced in the late 20s, and its growing popularity led to increasing sales of toasters (Gross, 2017). Most appliances were shipped from the United States to Canada, however there were a few Canadian manufacturers making toasters in this country that were still profitable given the tariffs faced by American imports (Crookell, 2006). Renfrew Electric Company Limited was a Canadian company manufacturing electrical goods in Renfrew, Ontario. They established a line of commercial goods under the name of ‘Canadian Beauty’, including toasters. Each toaster was stamped with a maple leaf as part of the product branding (“A Rapidly Developing Business”, 1915).

Given the high cost of importing, many American companies chose to open a Canadian division, including General Electric and Westinghouse, which opened headquarters in Ontario, in Peterborough and Hamilton, respectively (Jones, 2017; Westinghouse HQ, n.d.).

When toasters were first invented, electricity was not commonly found in Canadian homes. At first, toasters were typically used in commercial settings such as restaurants. The two-prong system for electrical plugs was standardized across North America in 1917, and by the 1920s it became more affordable to bring electricity into the home (Smith, 2020). Between 1941 and 1951, the percentage of homes with electricity increased significantly, from 69.1%, to 87.8%, with higher percentages in urban regions of the country (Gucciardo, 2011).

As Canadian electricity companies expanded their power generation initiatives, they had a surplus of power during off-peak hours. To promote using electricity during low use times, electricity producers in Canada began to encourage use of electrical appliances (Gucciardo, 2011). These companies targeted women in their marketing, promoting the benefits of appliances to reduce workload in the kitchen. Showrooms were set up across Canada by electricity manufacturers, inviting women to view various electrical appliances (Gucciardo, 2011). As it was a smaller investment, there was initially higher uptake of small electrical appliances, such as toasters and irons, than of the larger appliances. By 1931, 40% of homes across Canada owned a toaster (Gucciardo, 2011). Between 1952 and 1960, the total number of toasters manufactured in Canada increased from 198,200 to 278,567 toasters total, or a total value of $1.2 million to $2.6 million (Dominion Bureau of Statistics, 1962). A Slice of Design History

The form and aesthetics of toaster design in the 20th century was equally as diverse as the many ways that bread was toasted. Many toasters adopted an art deco aesthetic that gave each appliance a distinct appearance and style. Floral cut-outs patterned some toaster doors, while other toasters were adorned with clean, geometric ornamentation. Some toasters were very minimal, for example, this Westinghouse toaster pictured below has a main body consisting of chrome-finished metal, and simple repeating horizontal lines on the sides that mimic the styling of art deco architecture (Goss, 2004). As the styling of each toaster became more elegant, the product was marketed as a piece worthy of display, used to both impress guests and to assist the hostess in her food preparations. This is reflected in the design of the Sweetheart Toaster, a metal toaster of a unique form, with delicate bread baskets, floral ornamentation, and pale plastic accents (Orr, 2015).

The toaster has evolved from its initial modest design as a heating element fastened to a porcelain base, to a product displaying many beautiful designs. However, after more than a century of numerous styles, forms, and functions, the popularity of the pop-up toaster has never waned, and it remains as the design of most toasters today.

This research project was a special opportunity to better understand our everyday toaster and the way it fits in Canadian history. As a designer, it was a pleasure to investigate the stories behind a classic and often taken-for-granted piece of product design. Taking time to recognize the narratives hidden within these artifacts gave me a greater appreciation for these simple appliances.

Appliances that we would simply be toast without. 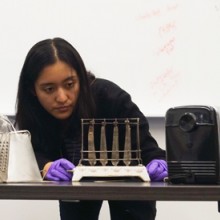 Sophie Nakashima is a curatorial intern with Ingenium. She is currently pursuing a Master of Industrial Design as well as a Diploma in Curatorial Studies at Carleton University. She is an avid museum-goer with a passion for inclusive and accessible design.