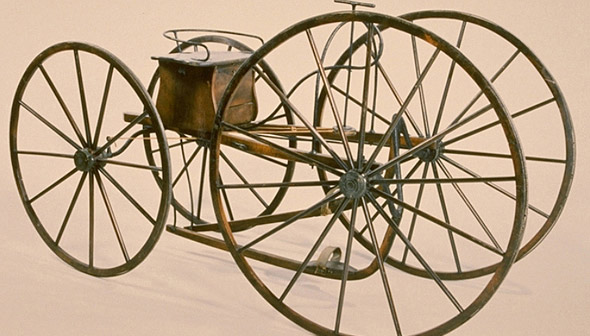 This quadricycle was part of a large collection of objects and literature the Museum acquired from collector Lorne Shields in 1982. The collection bears the name Shields.

In the mid-nineteenth century, many builders tried their hand at making a commercially viable cycle. The challenge was to create a vehicle that was sturdy yet light enough for a person to propel. Willard Sawyer of Dover, England, used his fine carpentry skills to craft multi-wheeled vehicles that stood the test of time and use. He constructed his machines entirely of hardwood with forged steel support. For propulsion, he used a treadle and crank system.

Willard Sawyer built and sold various models of quadricycles in the 1840s, 1850s, and 1860s. This quadricycle was made by his brother-in-law, Thomas Kelsey, who may have been trained by Sawyer. Kelsey operated a velocipede company in Margate, England, between 1867 and 1874. On this model, he used front-wheel drive with rear-wheel steering, to prevent the cyclist’s legs from interfering with the wheels during turns.