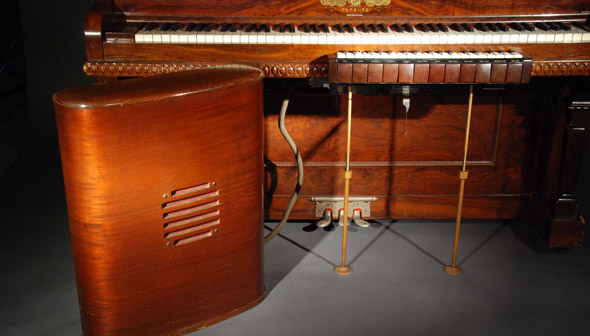 The Museum’s Solovox was made in Belleville, Ontario, by the Northern Electric Company under licence from the Hammond Instrument Co., of Chicago. Ken Baer originally purchased the keyboard from Heintzman & Co. in Toronto, around 1948. As the accompanist for a travelling evangelist, Baer had played an earlier model. He equipped his new keyboard with adjustable brass legs for easy attachment to any piano, and took the Solovox to numerous evangelical Baptist meetings in the Calgary, Winnipeg, and Toronto areas during the next decade.

The Solovox is a three-octave electronic keyboard instrument offering 12 pre-set tone colours. It is monophonic, producing one note at a time, and therefore incapable of playing chords. Tones are generated and amplified by an electronic circuit containing vacuum tubes, resistors, and capacitors housed in a “tone cabinet” that also holds a single speaker. The keyboard was designed to be attached beneath the keyboard of a standard piano, providing it with a second manual on which contrasting sounds could be played. A musician could play one keyboard with each hand, using the Solovox to produce sustained sounds, in contrast to those of the piano, which rapidly fade in volume.

The Hammond Solovox was probably the first widely available, purely electronic keyboard instrument. It differed from the popular Hammond organs of the same period, which used an electromechanical system of tone wheels and pickups to generate sounds.