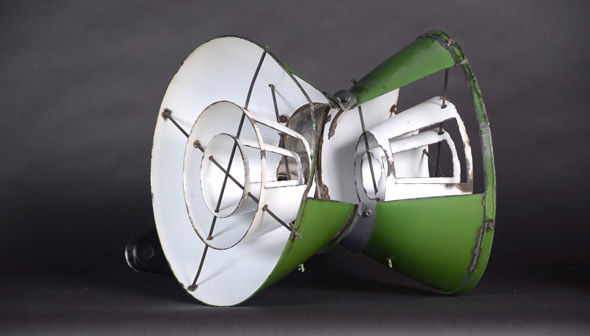 This lamp was originally installed in Port Arthur, Ontario. Ontario Hydro acquired the artifact for its Museum of Electrical Progress in the late 1960s, transferring it to the national collection in 1992.

This 1920 lamp was designed to provide more effective street lighting. It directed light along the roads more efficiently than previous systems, which had tended to distribute light into neighbouring yards, fields, and walkways. Its improved efficiency also meant that street lamps could be more widely spaced, reducing installation and maintenance costs.

As automobile traffic increased in the first decades of the twentieth century, so did the need for more and better street lighting. Inexpensive to install and with good colour rendering, incandescent light bulbs were commonly used to light streets in the first half of the century. In the late 1940s, they were gradually replaced by mercury-vapour lamps. In the 1970s, sodium lamps gained a large share of the market. Today, street light manufacturers promote LEDs as the most efficient means of illumination.