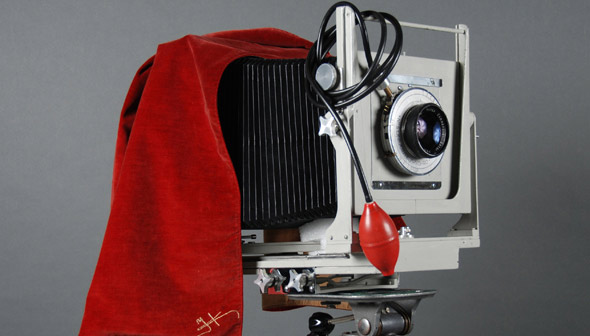 This camera, one of two identical models acquired by Yousuf Karsh in 1956, was the photographer's main portrait camera. He used it for more than three decades in his Ottawa studios, the first on Sparks Street and the second (and last) in the Château Laurier Hotel. He donated the camera to the Museum in 1997.

Although Yousuf Karsh took most of his portraits in 8 x 10 (203 x 254 mm) format, the camera had a removable back and could be adjusted for smaller film sizes. The camera was painted a pale grey. Karsh furnished the Calumet with his favourite lens, a 14-in. (356 mm) Commercial Ektar made by the Eastman Kodak Company in 1947. The camera used in Karsh’s New York studio was identical to the Ottawa Calumet, and was also fitted with a 14-in. Commercial Ektar lens. During a typical sitting, the 8 x 10 camera was set up on the floating-action tripod made by Davis & Sanford Company Inc.

Yousuf Karsh (1908–2002) was one of the most celebrated portrait photographers of the twentieth century. Born in Mardin, Turkey, he immigrated to Canada in 1924. He established a studio in Ottawa in 1933. For many years Karsh took this camera, or its New York twin, also in the Museum’s collection, across North America and to Europe. Karsh used the Calumets to photograph Canadian prime ministers from Diefenbaker to Chrétien, as well as Sir Winston Churchill, Ernest Hemingway, Mother Teresa, Margaret Atwood, Marc Chagall, and many other notable figures of his time.