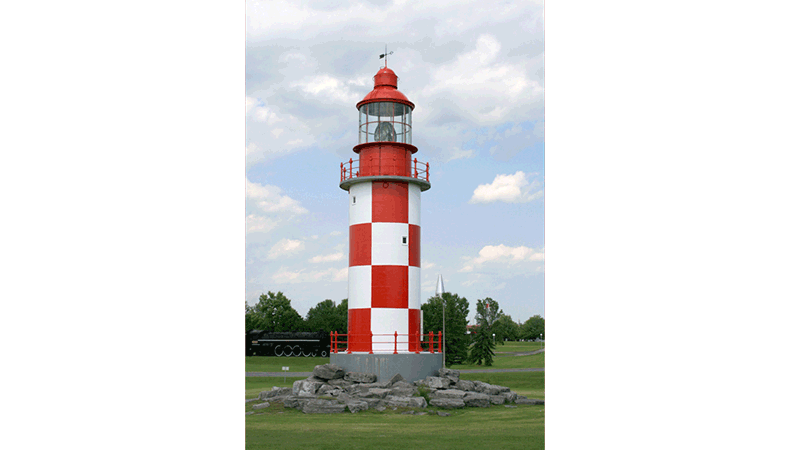 The Museum acquired this lighthouse on long-term loan from the Department of Transport, Government of Canada, in 1980, when it replaced the Cape North, Nova Scotia, lighthouse with a new structure.

British maritime officials chose prefabricated cast iron as a cost-effective material for building lighthouses in locations across the British Empire. In 1856, this method was used to build a lighthouse at Cape Race, Newfoundland. The tower is made up of 32 curved plates bolted together on the inside to form a 12-metre structure. Lighthouse authorities equipped the tower with a light consisting of 13 Argand lamps and reflectors.

Lighthouses are beacons that guide mariners through darkness, storms, and hazardous waters. This lighthouse once marked the first landfall for mariners travelling across the Atlantic Ocean. It was part of an extensive network of aids to navigation aids that helped make marine transportation and trade safe and efficient. After standing for 50 years at Cape Race, Canadian officials decided to replace it with a new and taller tower made of concrete. Since lighthouses were expensive to build and Canada had very a long coastline to cover, these officials chose to recycle the iron lighthouse. In 1907, they disassembled and moved the structure to Money Point on Cape North, Nova Scotia, to mark the entrance to the Gulf of St Lawrence. It stood there until 1980, when the government retired it from service and offered it to the Museum.