Zita Cobb opened the Fogo Island Inn, a 29-suite facility, on Newfoundland’s Fogo Island in 2012. It is a beautiful edifice, combining modern architectural themes with traditional Newfoundland constructional elements, providing travelers with a respite from today’s hectic world. It is also the basis for a unique business model: taking a small, almost quaint Newfoundland coastal town and making the community itself – its people, culture and environment - the main attraction for visitors.

Perched on a rocky plateau, on a small island at one of the four corners of the earth, is the multimillion dollar Fogo Island Inn. The award-winning inn opened in 2012, combining modernist architecture and a minimalist aesthetic with themes and imagery that are traditional to Newfoundland (such as the wooden stilts which held up the shore-side fishing houses of the province’s past). The true innovation of the inn is not to be found in its beautiful stylings, however, but in the intent behind the building. According to the inn’s website, “the goal was to ‘find new ways with old things’ in order to both preserve and stimulate cultural production on Fogo Island and to create restorative spaces for guests who come to the Inn for refuge from the noisy, busy storms of modernity”. In essence, it is an attempt to bring together the island community to foster an economic and cultural boost. The mind behind this plan is Zita Cobb, a Newfoundland-born businesswoman who invigorated her hometown of Fogo Island through the construction of the inn as a cultural hub for artists and art enthusiasts from around the world.

Through the construction of the inn, Zita Cobb has renewed the economic situation of the island by creating a venue for artists to both create and to showcase their creations. By bringing people from across the world to the unique culture and environment of Fogo Island, Cobb has globalized the rural community of Fogo by giving the island’s residents the ability to sell their talents to a market that would not otherwise exist for them.

Cobb is also a co-founder of the Shorefast Foundation, a registered Canadian charity which seeks to revitalize rural communities that are suffering economic decline. To achieve this vision, Cobb and the foundation use “the concept of social entrepreneurship – using business-minded ways to achieve social goals”. This unusual business model utilises the unique culture of a region to generate the capital that is needed to produce desired social changes. The foundation also holds that “while charity itself is not sustainable, social entrepreneurship can be the basis of building sustainable communities”. This showcases the foundation’s ethos of community-supported independence and responsibility.

The implementation of a globalized artistic marketplace is an economic innovation that is culturally and environmentally sustainable, both crucial aspects of Cobb’s economic philosophy. As stated in the Shorefast Foundation’s website, the organization aims to “move toward a globalized network of intensely local places”, to amplify the unique cultures of areas and to make them accessible at a global scale. This approach allowed the residents of Fogo Island to invigorate their economic situation while having a negligible toll on the environment. It also promoted the continuation of local culture, a tradition that “honours four centuries of lived experience on the Northeast coast of Newfoundland”. Part of Cobb’s innovative ideas are her objectives to combine a strong environmental priority with a renewal of cultural practices, and to do so in such a way that will allow the people living on Fogo Island to remain on the island rather than being forced to leave to look for employment.

The principles of the Shorefast foundation focus on the conservation and celebration of a community’s culture, and the application of these assets to an economic model which would allow a community to survive over the long term while not harming their environment. In keeping with this, the investments and income of businesses in communities operating under the Shorefast model would trickle back into the community and contribute to its overall continuity and well-being. The foundation also places art in a place of honour, viewing it as “a way of knowing, of belonging, of questioning, of innovating”; art is thus able to positively impact the way that societies change. The foundation believes that “losing our rural communities and the human ways of knowing they contain is neither inevitable nor necessary”.

Cobb and the Shorefast Foundation see their success with the Fogo Island Inn as only one iteration of a business model that could be applied to other small communities with minimal adjustments. By investing millions of dollars of her own money into realizing a speculative business plan, she has shown that the Shorefast “social entrepreneur” business model is a viable, sustainable method of economic and cultural growth for rural communities. As the model is transferable to other communities, her innovative ideas have the potential to not only rescue rural areas from the brink of resettlement but also to enrich the global community through globalizing these communities’ arts and cultures. 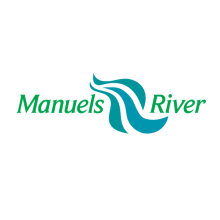 We preserve and interpret the natural, cultural and geological history of Manuels River through the development of educational, recreational and conservation opportunities. We own and operate the Manuels River Hibernia Interpretation Centre as well as maintain the Manuels River trail system.