By: Mike DiCola
Ingenium – Canada's Museums of Science and Technology Photo Credit
Courtesy of Mike DiCola
Before taking up his duties at 2 Wing in 1961, Dad had an opportunity to play tourist for a day in Paris.

I grew up as the son of a serving member of the Royal Canadian Air Force (RCAF). Although we were officially designated “dependents,” my brother and I have ever since been Air Force “brats” — a term that is shared only with great affection among all of us who shared that life.

Dad wasn’t a pilot, but along with his team in Sabre Maintenance, he sure kept them flying. And I’ve never yet heard of a pilot who forgets to acknowledge his or her ground crew’s efforts. Growing up as brats, we certainly knew that one of our parents was doing something pretty special. I felt no small measure of pride seeing Dad in his uniform, marking the changes from winter blues to summer browns.

Mom’s “service,” while unofficial, nonetheless also made a huge contribution to managing the family. To take just one example, when Dad was posted overseas he preceded us by about three weeks to get established and set up living space. Mom singlehandedly oversaw our packing up and relocation from RCAF MacDonald, Manitoba, to 2 Wing, a logistical task that included not only rail, but also ship travel from Montreal to Le Havre, France. This was no easy feat, especially with two rambunctious sons in tow.

Dad had a bonus uniform because he was also a bandsman. That meant that during our time overseas, we frequently travelled to some of the locations in which the 2 Wing band was parading as part of some regional festival. It was made even more special because during those years, the 2 Wing band was almost unbeatable in the Canadian Air Division band competitions.

During a ceremony one day in the summer of 1961 while serving at 2 Wing, Dad had two duties. Briefly stepping aside from his trumpet playing, here he is in his bandsman’s uniform (note the crossed trumpets badge above the Corporal’s chevrons on his sleeve) in order to be presented with the Canadian Forces Decoration (CD), a medal that recognizes an exemplary conduct standard after 12 years of service.

I can still recall the make and model of the family cars we had — even their licence plate numbers!

But perhaps my single most intense memory comes from the time remembered in history as the Cuban Missile Crisis. Although I was only 10 at the time, I was aware of a terrifying tension in the base atmosphere. It was partly due to 2 Wing’s geography — on France’s eastern border with Germany — but also because there were regular, unannounced air raid drills that would send us trooping down to the basement of the apartment block we lived in, while Dad and his colleagues kept the base on high alert until the crisis finally wound down.

Vacation time was another experience I’ve since found was shared by many brats. We camped. Family camping in Europe is nothing like it is in Canada. You pitched a massive tent with a separate nylon bedroom slung inside it. Your campsite was inevitably so small that the ropes supporting your family tent often overlapped those of your campground neighbour’s tent. But I saw much of France, Belgium, Luxembourg, Germany and even the French Riviera over the course of several years of family camping.

But it was only after leaving the brat life, when Dad completed his RCAF service, that I really came to appreciate the special nature of the lifestyle of the military brat when compared to that of my peers, who had spent their early years on “civvy street.”

For one thing, when we moved into our first non-military house after Dad’s discharge, I discovered that in the small Ontario town into which we moved, pretty much everyone of my age group had grown up together. I felt like I was an outsider for months, before I finally linked up with several good friends.

In base life, by contrast, we tended to make friends — good friends — very quickly, often in a matter of days. I think it was because even when we measured our ages in single digits, we understood it was possible that the very next week, a new friend’s parent might receive a posting that would send him half a world away. So we wasted no time on the process of trying to fit in. We all fit in from the start. I still remember with great affection many of the friends I had as a brat. There are even one or two with whom I have sporadically kept in touch, even after half a century.

Today, thanks to the Internet, I am discovering that many of my brat experiences are being brought back via websites devoted to Canadian military brat life in general and 2 Wing brat life in particular. Not so long ago, I even spotted myself in a group picture of 2 Wing’s Silver Falcon Wolf Cub Pack, with Dad just two rows behind me in his uniform as Akela.

Even more recently, I was privileged to participate as a volunteer at a Canada Aviation and Space Museum Day, organized by the Military Family Resource Centre as a way to bring families together and introduce them to Ottawa’s services generally, and especially those offered to military families. It even included the local Cub Scouts and a Military Wives Choir that is part singing experience, and part supportive socializing opportunity for other wives.

And on that day, all the old feelings of being part of a family — way bigger than my parents, my brother and I — came rolling back.

As I look back on my formative years spent as an Air Force brat, I realize that I owe pretty much all of who I am today to that experience. And for that, I’ll always be grateful to Dad for having answered the call to serve.

Dad’s team while stationed at 2 Wing was Sabre Maintenance. In this 1962 or ’63 photo of the entire section arrayed in front of two of their aircraft, he is at the very left of the trio of airmen squatting in the second row. 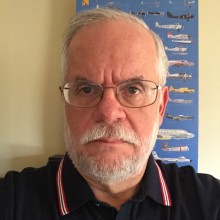 Mike DiCola is a volunteer at the Canada Aviation and Space Museum, with a special interest in aircraft of the Second World War. Until his mid-teens, he was an Air Force “brat” while his Dad served in the RCAF. Probably inspired by being so much on the move, he still enjoys travel with his wife, Leslie. Daughter Katie, meanwhile, is keeping the family connection to aviation and space strong as she pursues a PhD in aerospace-related robotics.