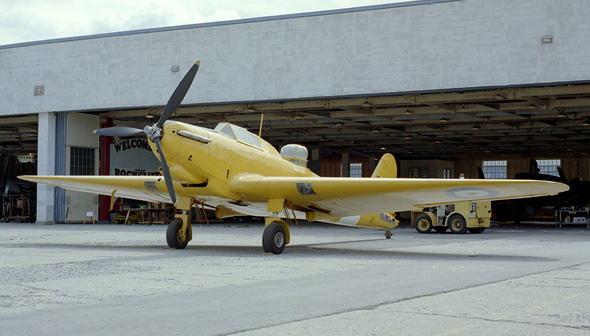 The Fairey Battle was a disaster as a light day bomber, being too slow, vulnerable and under-gunned for air warfare in Second World War. Those surviving the early war years were reallocated to training duties. From August 1939, 739 Battles served in Canada as trainers. Most were used for bombing and gunnery training, with a small number equipped as target tugs. Some aircraft had the rear cockpit replaced with a Bristol turret for turret-gunnery training.

After First World War, relatively slow, light bombers were considered militarily feasible until, early in Second World War, Fairey Battles were blown from the sky by fast single-seat fighters and anti-aircraft fire. Their place in the military armoury was filled by fighter aircraft which were fast and could effectively defend themselves after dropping their bomb.

This Battle was manufactured in 1940 as a pilot trainer by the Fairey Aviation Company Limited, in Stockport, England, and was immediately delivered to Canada. It was taken on strength by the RCAF in January 1941 as a standard Battle I, serving at No. 31 Service Flying School in Kingston, Ontario, until December of that year, when it was stored.

In December 1942, it was converted to a turret-gunnery trainer at St. Jean, Quebec, with a Bristol turret used on the Canadian-made Bolingbroke. It served briefly at No. 3 Bombing and Gunnery School in Macdonald, Manitoba, and was stored in April 1943. In 1946, the Battle was designated for public display, and was stored again, beginning in July 1950.

It was eventually refurbished by the RCAF at Calgary in 1963, and transferred to the RCAF historical aircraft collection at Rockcliffe Airport in 1964.