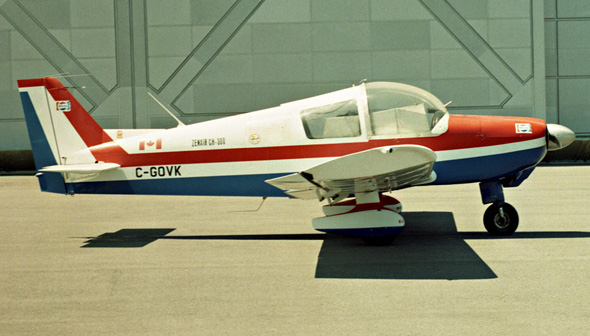 The Zenair Company was established in Canada in the early 1970s to design and manufacture light airplane kits for the home builder. Zenair provided either parts-only kits or kits with some components partially constructed. The company has developed eight light airplane designs. The Models CH-200 and CH-300 won many awards for efficiency and quality during the late 1970s. The CH-300 buyer had a choice of three different engines, as well as a tricycle or tail-wheel configuration.

The Museum specimen was built for Robin (Red) Morris' record breaking, non-stop trans-Canada flight in 1978. The CH-300 was well equipped for the flight, with blind flying instruments, an autopilot and its fuel capacity increased from 127 litres (28 imp. gal.) to 773 litres (170 imp. gal.). A special seat was also installed for comfort. The trans-Canada flight was flown from west to east to take advantage of prevailing winds, which meant that the flight over the Rockies in the west would have to be tackled when the CH-300 weighed its heaviest. Despite strong headwinds near the Manitoba-Ontario border and the loss of the electrical generator, the 4 500-km (2 800-mile) flight was completed in the time of 22 hours, 43 minutes and 43 seconds.

The kit for this CH-300 was manufactured in 1978 by Zenair Limited in Richmond, Ontario. It was assembled by Robin "Red" Morris, with help from Gerry Boudreau and Doug Holtby, who worked at Zenair. The aircraft was completed in May 1978 and flown in Buttonville, Ontario the same month. After its initial flight, it was fitted with instrument flight equipment, an autopilot and auxiliary fuel tanks.

Morris completed an historic flight with this aircraft over July 1 and 2, 1978, flying non-stop from Vancouver to Halifax (4,450 kilometres [2,760 miles]) in 22 hours, 43 minutes and 43 seconds. This time set three world records for light aircraft. The flight was particularly daring as Morris flew west to east to take advantage of prevailing winds, which meant he flew over the Rockies when the aircraft was at its heaviest.

When the Museum purchased the CH-300 in 1984, Morris flew the aircraft from Toronto to Rockcliffe airport.