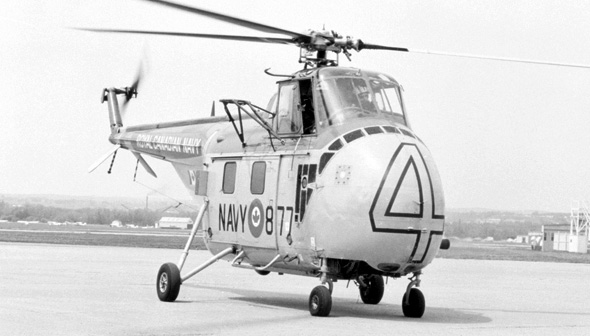 The S-55 was the first helicopter with both the space and power to carry large loads. It was in heavy demand by both civil and military operators. Okanagan Helicopters operated 21 S-55s while the RCAF flew 15 transport versions and the RCN operated 13 HO4S-3. A total of 1 100 were built in the United States and a further 550 in other countries. The HO4S-3 retired from Canadian service in 1970.

The S-55 was the world’s first certified transport helicopter, the first helicopter to fly the Atlantic, and the first equipped with anti-submarine sonar and torpedoes. The HO4S-3 was used by the RCN to test an idea that led, after several years of research, to the development of the "Beartrap" equipment which allowed helicopters to operate from small warships in the open ocean.

Built in 1955, this S-55, known as "Shearwater Angel," served the RCN for fifteen years until 1970, when it was retired and donated to the Museum. It participated in eight rescue missions and was credited with rescuing thirty-two people and four animals over its lifetime. Eight maple leaves decorate the nose of the helicopter, one for each rescue mission.

Its most famous mission was its rescue of twenty-one crew members of the Liberian freighter Kismet II, along with the ship's dog and cat, which took place on November 26, 1955 off the coast of Cape Breton Island.