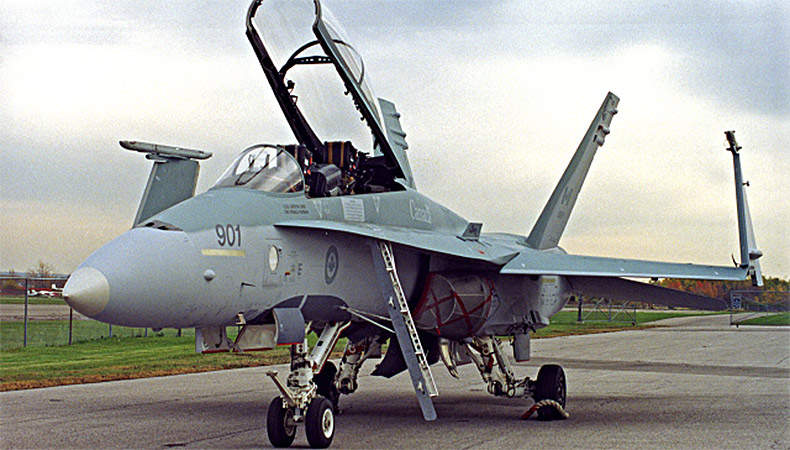 The McDonnell Douglas F/A-18 Hornet is one of the great success stories of the American aerospace industry. This twin-engined supersonic fighter and attack aircraft can operate from both aircraft carriers and land bases. Developed primarily for use by the U.S. Navy and Marine Corps, it also serves in the air forces of seven other countries, from Canada to Australia, and from Finland to Malaysia.

Canada was the first foreign country to order F/A-18s with a contract for 138 CF-188s signed in April 1980. They were to replace three older aircraft of the Canadian Forces: the McDonnell CF-101 Voodoo all-weather fighter used to protect Canada’s air space, as well as the Canadair-built CF-104 Starfighter and CF-116 (CF-5) attack fighters dedicated to help NATO in Europe.

This CF-188 was manufactured by McDonnell Douglas Corporation in St. Louis, Missouri in July 1982. It was the first CF-188 delivered to Canada, and the first two-seater model designed for training.

As Canada’s first CF-188, the aircraft was part of a large ceremony at the factory on July 28, 1982. It made its first flight a few days later. The Canadian Forces officially accepted the aircraft on October 7. On October 25, Prime Minister Pierre Elliot Trudeau was on board one of the two CF-188s, including the Museum's aircraft, that flew over Ottawa. Soon after this, the aircraft was delivered to No. 410 “Cougar” Squadron, the operational training unit for the CF-188, based at Cold Lake, Alberta, where it served as a trainer.

When maintaining the aircraft in flying condition became prohibitively expensive, it was transferred to the Museum. On October 18, 2001, it was flown to Rockcliffe airport. Given the airport's short runway, the Canadian Forces installed a mobile arresting gear (similar to that used on aircraft carriers), to ensure a safe landing.