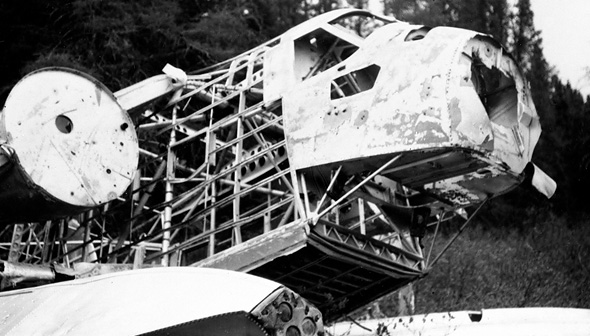 The Fleet 50 was planned as a twin-engine transport for use in the north. It was designed to be strong, and easy to maintain, able to handle bulky, awkward loads. Rugged simplicity was to be its essence. Only five were built. The advent of Second World War and a few misfortunes, such as one Freighter burning to the ground during a demonstration in Chicago, doomed this interesting bush plane to a short career. The last two ended their flying days in 1946.

Although there were complaints about its lack of power, the Freighter was valued for its ability to handle oversized loads. A nose-door opened to expose an unobstructed compartment running the length of the fuselage underneath the cockpit and the cargo floor. Nose-loading cargo planes became common in later years.

This Freighter, built in 1939, was the third of five produced by Fleet Aircraft Limited in Canada. Originally registered as CF-BJU, Canadian Airways used this aircraft on trial for a few months in 1939. In August 1942, it was leased to Quebec Airways. It was finally sold, in October 1942, to the RCAF, and used for training paratroopers at the Rockcliffe air base. The aircraft was moved to Trenton, Ontario in 1943, and flown by the RCAF as an air ambulance and floatplane trainer.

The Labrador Mining and Exploration Company Limited purchased the Freighter on June 14, 1944. Nine days later, a downdraft during take-off forced the aircraft onto a beach, damaging it beyond repair. The aircraft's remains were salvaged by the Museum in 1964.

The Museum also has components of the fourth 50 Freighter in its collection. This aircraft was leased by Fleet to a number of operators before being sold to Austin Airways in 1945. In 1946, it was destroyed by engine fire.