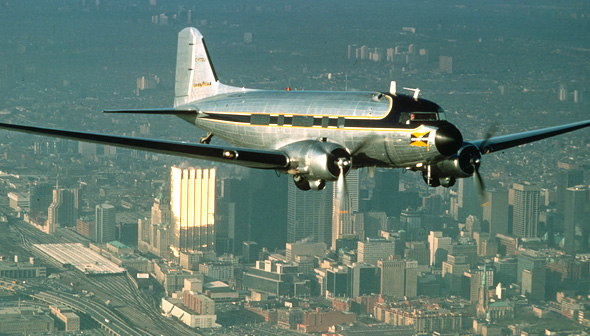 The DC series of aircraft was developed in response to the challenge posed by the Boeing 247 and culminated in the magnificent DC-3, the most successful air transport of all time. The DC-3 met with immediate enthusiasm as the first airliner in the United States able to work at a profit without government subsidy. By 1939 the DC-3 accounted for 90% of world airline trade. Almost indestructible, large numbers of DC-3s continued to fly in the 1990s, carrying passengers and cargo.

The DC-3 came into being almost by default. Douglas built a larger version of the DC-2 to contain berths for night flights. The result, called the Douglas Sleeper Transport, had a longer, wider fuselage. The DST was a limited success, but when its big fuselage was filled with passenger seats instead of berths, the DC-3 was born. A combined total of about 3000 DC-3s were built under licence in Japan and Russia.

This DC-3 was manufactured in 1942 by Douglas Aircraft Company Incorporated. It was completed as a DC-3 airliner after to the attacks on Pearl Harbor in 1941, and later served with the U.S. Army Air Forces as a C-49J. In 1945, it was sold to Trans-Canada Air Lines, becoming the first DC-3 operated by that airline.

Goodyear Tire and Rubber Company bought the aircraft in 1948 and refinished it for VIP transportation. It served with Goodyear until 1983, when the company donated it to the Museum.