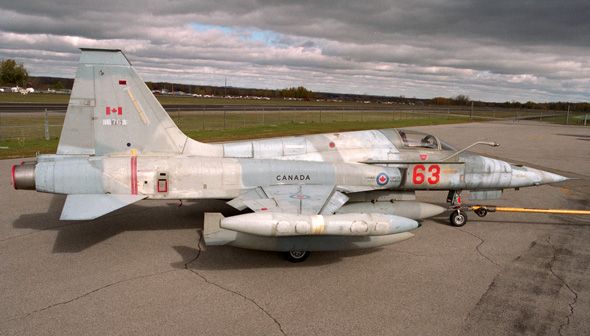 The Northrop F-5 helped reverse the 1950s trend that favored the development of large and expensive tactical fighters. Employing high-thrust but low-weight engines initially designed for guided missiles, the aircraft was planned as an affordable replacement for the subsonic jets developed after Second World War. The United States Air Force showed more interest in the two-seat versions as supersonic trainers, the world’s first. As the fighter version was well suited for defending a small country’s borders, it became the developing world’s most widely used light-weight fighter through the U.S. Government’s Military Assistance Program.

A modified version was built in Canada during the late 1960s and early 1970s, the last fighter manufactured in this country. Modifications included a probe for air-to-air refueling, more sophisticated avionics and higher powered Canadian-built engines. Many went directly into storage after Canada reduced its NATO commitments but those used in the training role became popular with fighter pilots making the transition to the CF-18.

This CF-5 (officially designated CF-116) was manufactured by Canadair Limited of Montreal, Quebec in August 1970. Delivered to the Canadian Armed Forces in December of that year, it was put in storage until 1979.

Over the course of its active career, the aircraft was based at several locations across Canada, including Trenton, Ontario; Chatham, New Brunswick; and most frequently at Cold Lake, Alberta. It was put in storage in 1995.

The CF-5 was transferred to the Museum by the Canadian Forces in 1997. It retains its Warsaw Pact "aggressor" markings from its last training exercises.