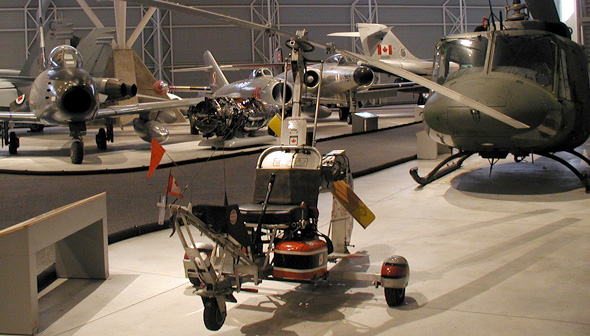 The gyroplane is a rotary-wing aircraft usually associated with the 1930s. Its free-wheeling rotor is spun by the action of the air on its airfoils when the aircraft is in motion; propulsion is provided by a conventional propeller. The rotation of the rotor needs to be initiated on the ground when the aircraft has no forward motion.

Gyroplanes were originally designed and built for the commercial market as aircraft capable of very short takeoffs and landings. The machines pioneered by Juan de la Cierva in Spain and the Pitcairn and Kellett companies in the United States resulted from their research into rotary wings and their efforts to develop a true helicopter. However, unlike helicopters, gyroplanes cannot hover, take off vertically or fly backwards or sideways.

During the 1970s and early 1980s, Dutkewych flew the aircraft in the greater Toronto area, accumulating over 150 hours of flight time. He modified the aircraft in a number of ways, including adding a muffler. Over the years, the Gyrocopter was flown and displayed at numerous air shows, garnering a great deal of attention.

Dutkewych donated the B8MG to the Museum in 2002. It shares a set of interchangeable aluminum rotors with the Museum's Bensen B8 Gyroglider, which was also built by Dutkewych.