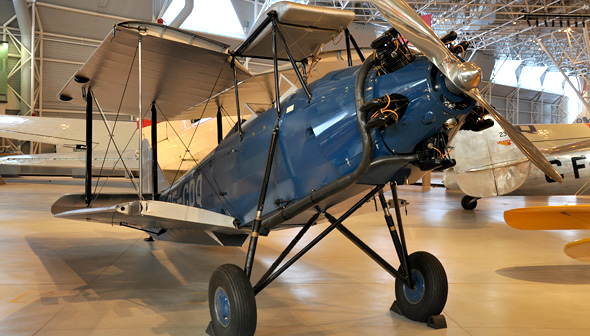 Originally built as a light sporting aircraft, the Avro Avian was also useful as a trainer to civil operators and some Commonwealth air forces. In Canada, civil Avians were used by many flying clubs and bush operators, while the 30 or so supplied to the RCAF were flown little and used mainly as instructional airframes or passed on to flying clubs. Thirty-nine Avian IVMs were assembled by the Ottawa Car Manufacturing Co.

W.R.(Wop) May made an historic mid-winter flight in an Avian to deliver diphtheria anti-toxin to Fort Vermillion, Alberta, from Edmonton in 1929. Unlike earlier Avians, whose fuselages were constructed of wood, the IVM’s fuselage is made of steel tube. The “M” in the designation stands for “Metal”. Most of the components used in Canadian-assembled Avians were manufactured in England, but some of the wing and tail surfaces were made by the Ottawa Car Manufacturing Co.

The Museum's Avro Avian was delivered from the U.K. to the RCAF in April 1930. The Department of National Defence transferred it to the Moose Jaw Flying Club in 1932. Ownership went to the Winnipeg Flying Club in 1935 and, in 1937, to a private individual. The aircraft was in storage during the Second World War, after which it was sold to Charles Graffo, who then bequeathed it to the Museum in 1968.