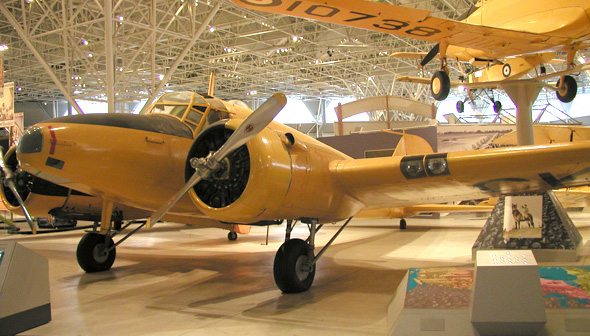 The original three Ansons were built to civil specifications. The design was then modified for RAF use on coastal patrols. Early in Second World War, the Anson was selected as the standard twin-engine aircrew trainer for the British Commonwealth Air Training Plan. To ensure availability, a production line was set up in Canada. By 1943 Canadian modifications resulted in the Anson V. Canada built 2  880 Ansons. After the war, Ansons continued in civilian use as light transports.

Stable, strong, and reliable, it was known as “faithful Annie”. After a crash 565 km (350 mi) north of Edmonton, an Anson was flown out with almost 3 metres (10 ft) removed from each wing to even up the damage. Needing full power to fly, it ran out of fuel and landed on the frozen Athabasca River. The pilot temporarily lost his licence, but saved the Anson.

This Anson V was one of 748 manufactured by MacDonald Brothers Aircraft Limited in Winnipeg, Manitoba. Built in 1945, it was accepted by the RCAF in June of the same year. It served with Air Transport Command from 1948 to 1952 and at the Central Experimental and Proving Establishment from 1952 to 1954. The RCAF stored the aircraft until 1964, when it was selected for preservation and transferred to the Museum.

The Anson V featured a unique moulded-plywood fuselage which replaced the fabric-covered fuselage of earlier models. The smooth contours of the new fuselage enhanced performance and made the aircraft relatively draft-free, an important factor in the Canadian climate. The all-wood Anson was popular for magnetic surveys in Canada’s north.