A Decade Of Feeder Studies For Canadian Nuclear Power Canada’s fleet of nuclear power plants have realized impacts worth hundreds of millions from research supported by a decade of stress measurements using neutron beams to ensure their safe, reliable and economic operations.

Two unexpected leaks in feeder bends at the Point Lepreau Generation Station (PLGS) in 1997 and 2001 resulted in costly outages and had repercussions throughout the Canadian nuclear power industry. New Brunswick Power needed to understand the underlying causes to assure safety of resumed operation.

The Canadian Neutron Beam Centre (CNBC) played a critical role in the failure analyses, demonstrating that stress left by the manufacturing procedure was a major factor in producing the cracks. Subsequently, the industry pooled money through the CANDU Owners Group (COG) to study the cracking mechanism, to assure safety for relicensing, and to determine how to manage the scope of on-going feeder inspection programs. The COG program supported substantial research efforts to further understand the role of stress and to help determine which feeder bends were most likely to be affected. These studies used the CNBC’s neutron stress-scanning capabilities frequently from 2001 to 2008, and most recently in 2011, to determine the distribution and magnitude of residual stresses in various feeder bends.

The initial failure analyses and the following decade of research and operating experience led to many positive impacts on the industry, informing safety evaluations, providing confidence for a multi-billion export project, minimizing down time, informing lifetime management, and ultimately solving the underlying issue for the long term. These impacts are summarized as follows:

The availability of neutron beams at the CNBC to easily obtain stress data non-destructively has been of immense benefit to the entire industry, helping it to demonstrate safety, assure export clients, and operate reliably. While many other research studies and methods contributed to these impacts, stress data from the CNBC played a critical role. The value to Canada of the impacts of this one line of research can be estimated to be on the order of hundreds of million dollars, exceeding all of Canada’s direct investments in the neutron beam laboratory at Chalk River since neutron scattering was pioneered there in the 1950’s.

More details and supporting information about this line of research and its impacts are available at http://cins.ca/2015/02/01/a-decade-of-feeder-studies-summary/ 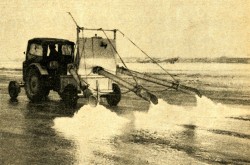