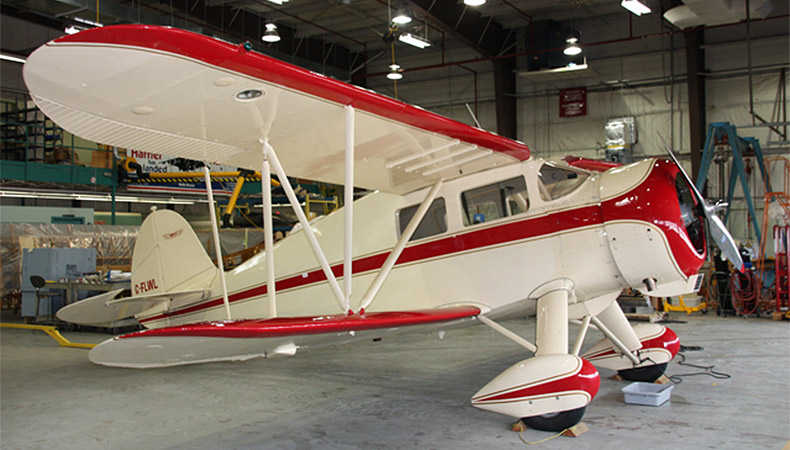 In the early days of aviation, pilots flew in aircraft with open cockpits even though their passengers sat in enclosed cabins. In the mid-1920s, a few companies developed aircraft with enclosed cabins for both the pilot and passengers. The success of this new style prompted more companies to manufacture airplanes with enclosed cockpits. These cabin aircraft became common in the 1930s. In Canada, they were ideal for bush flying: the cabins protected pilots from bad weather and extreme temperatures, and the roomy interiors could carry cargo and passengers.

The Waco Aircraft Company produced its first cabin craft in 1931. Like many carmakers, each year Waco introduced a new cabin biplane that was usually an improved version of the previous model. Notably, Waco's cabin aircraft were used extensively in Canadian bush flying. High-wing monoplanes were generally preferred over biplanes, since the single high wing could easily clear docks and brush that might snag a biplane's lower wing.

The Waco VKS-7 cabin biplane, first produced in 1937, was easily adapted to serve as family airplane, air ambulance, cargo or charter transport, or to land on wheels, skis or floats. The interior was comfortable and attractive, and the aircraft's stable nature, even in rough weather, endeared it not only to veteran pilots but also to first-time passengers. VKS-7s are a classic example of the type of airplane that introduced aviation to the corporate world.

Manufactured in 1941 and 1942, the VKS-7F was a version of the VKS-7 modified for the Civilian Pilot Training Program (CPTP), a government-funded initiative to train civilian pilots in the United States. The letter "F" indicated that the aircraft had wing flaps. VKS-7Fs were used as navigational trainers for cross-country flying and, more particularly, for teaching through "weather-blind flying," where pilots navigate using instruments alone.

The Museum's VKS-7F was built in 1942 and is one of the last cabin biplanes built by Waco. It changed hands a number of times during its history. Under the American registration number N 31676, it was a navigational trainer with the CPTP and then had four other American owners. Imported to Canada in 1959, ownership passed through four Canadians before the aircraft was donated to the Museum in 2008.

In addition, the aircraft's wings with flaps were replaced with flapless wings after a crash in the United States. Since then, the aircraft has usually been referred to as a VKS-7, rather than a VKS-7F.