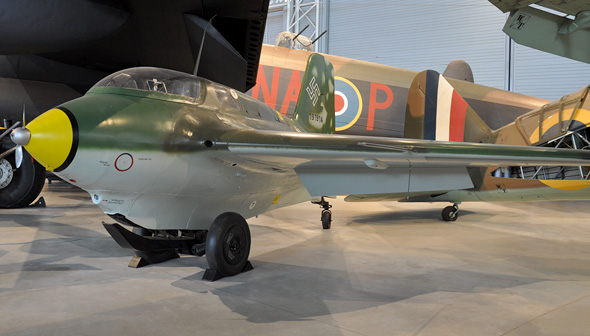 As the only operational rocket-powered fighter of Second World War, the Komet was designed to exceed the performance of conventional aircraft. Originally tested as a glider, the tailless design incorporated a wheeled dolly dropped during takeoff, and a landing skid under the fuselage. The Komet first flew operationally in May 1944. Though the Komet was not a significant factor in German air defence, the German Air Force took delivery of 339 and flew them until the end of the war.

A number of factories were involved in the manufacture of this Komet before it was assembled by Klemm Technik GmbH in Germany, in 1945. It was delivered to the Luftwaffe fighter unit JG/400, captured at Husum, Germany, in May 1945 and sent to the United Kingdom for testing. It was shipped to Montreal as a war prize in 1946.

Having been taken apart in the U.K. for shipping, the Komet was reassembled at Rockcliffe airport by the RCAF in September 1946. It was held in storage at various locations, beginning in Winnipeg at North West Air Command, until being moved to No. 10 Repair Depot Detachment at Portage la Prairie in 1950. It then appears to have been stored at Charter, Manitoba, Macdonald, Manitoba and Lincoln Park, Alberta, before it was transferred to the Canadian War Museum in 1964. Here, it was refinished and displayed in the Luftwaffe JG/400 markings. Although officially transferred to this Museum in 1967, it was located at the War Museum until the 1980s.

Between 2000 and 2001, Aviation Museum conservation staff restored the aircraft, finding some of its original colours and markings underneath accumulated layers of paint.

With only 7.5 minutes of full power, the Komet climbed to operational altitude, then glided to a landing after its fuel was exhausted. With power either turned on or off, flight at altitude consisted of gliding interspersed with short bursts of power. Combustion in the temperamental rocket motor depended upon the critical mixture of two chemicals which generated extreme heat when combined. The aircraft was prone to explosion upon landing if fuel remained in the tanks. Despite exceptional flying characteristics, the Komet was unsuccessful as an interceptor because of its fast closing speed and slow-firing, short-range cannon. A pilot had to be very good or very lucky to hit a target.