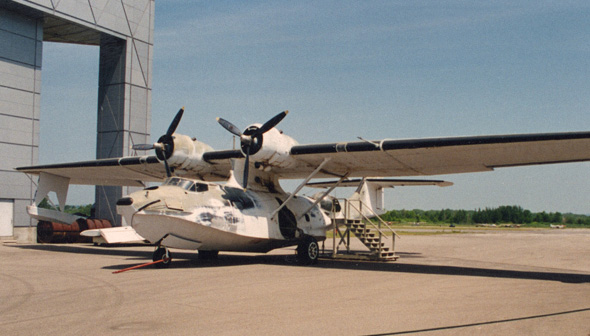 Designed specifically for ocean patrol duties, the Canso amphibian had good range and endurance. All Canadian-operated Cansos were built in Canada, either by Boeing Aircraft of Canada or Canadian Vickers Ltd, and many were supplied to Canada’s allies. The Canso was a very successful anti-submarine patrol bomber during Second World War and continued in service with the RCAF until 1962. Many were sold after the war and some were still operating in the Canadian North in the early 1990s.

Even though its wing-tip floats retract for less drag when flying, the Canso is a slow flyer. Crews used to say that it took off, climbed, cruised, landed, stalled, all at 90 mph (150 km/h). In total, 3 431 were built in Canada, the United States, and Russia, more than any other flying boat. Flight Lieutenant D.E. Hornell posthumously won the Victoria Cross for attacking a submarine in a Canso.

This Canso A was manufactured in 1944 by Canadian Vickers Ltd. in Montreal, and was delivered to the RCAF the same year, serving initially with Eastern Air Command. It was placed in storage in Mount Pleasant, Prince Edward Island, in 1945.

In December 1948, the aircraft was taken out of storage to serve on search-and-rescue operations. It was used by various units, from one end of the country to the other, between 1948 and 1961.

The Canso was retired in 1962. It was then refinished by the RCAF in the markings of Flight Lieutenant David Hornell's aircraft of 162 Squadron, RCAF. It was transferred to the Museum by the RCAF in 1964.