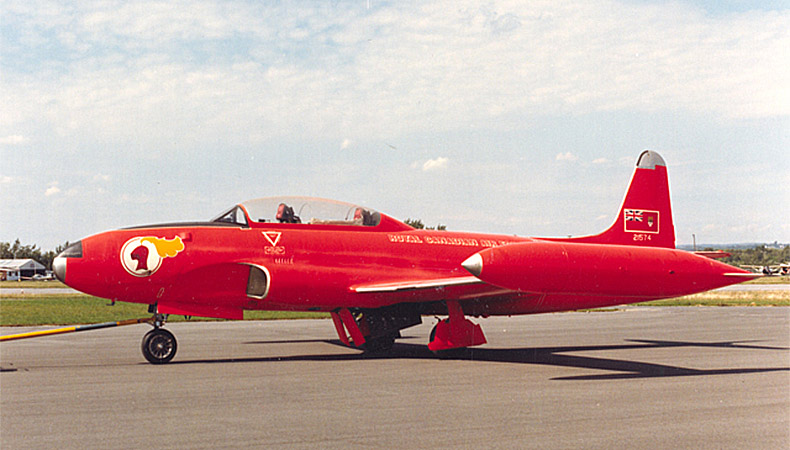 The Silver Star is a two-seat version of the Lockheed P-80, the first operational American jet fighter. The RCAF selected the Silver Star as its first jet trainer, but had the design modified to accommodate a more powerful British engine. After the first Silver Star was delivered by Lockheed, production on what was to total 656 aircraft began at Canadair Ltd. in Montreal. Besides providing excellent service to the RCAF, Silver Stars were also supplied to Bolivia, France, Greece, Turkey, and Portugal.

The name “Silver Star” never caught on in Canada. Designated T-33 in the United States, the aircraft became known universally as the “T-Bird”. The Canadian Forces retired its last CT-133s in the spring of 2002.

This Silver Star was manufactured in February 1957 by Canadair Limited in Montreal, Quebec and was accepted by the RCAF in March that same year. For the next seven years the aircraft served in training roles at RCAF stations at Macdonald and Portage la Prairie, Manitoba; Edmonton and Lincoln Park, Alberta; and Saskatoon, Saskatchewan.

As of February 1961, when the aircraft was painted red, it was also flown as the Red Knight, the RCAF's solo aerobatic aircraft. The Silver Star was transferred to the Museum in May 1964. Its Red Knight markings have been retained.