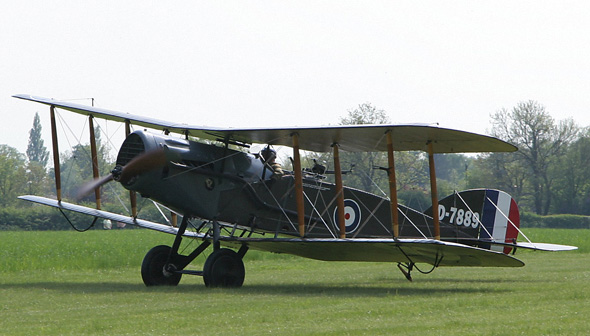 The Bristol Fighter was the most successful two-seat combat aircraft of the First World War. It was initially designed as a reconnaissance machine to replace the Royal Aircraft Factory BE2c, which was quickly becoming obsolete. However, the Bristol Fighter’s robust design, powerful engine, good manoeuvrability and relatively heavy armament enabled it to excel as a fighter aircraft.

In light of the increasing losses of outdated reconnaissance machines, the origins of the Bristol Fighter began with a Royal Flying Corps request for a two-seat reconnaissance aircraft that was capable of defending itself. This implied a design that combined speed, maneuverability and effective defensive armament. However, the type’s operational debut with the Royal Flying Corps was a disaster. Before their potential was recognized, a number of Bristol Fighters were lost when they were flown in tight defensive formations calculated to give the observer a favourable shot. Only when crews realized that this large and seemingly unwieldy aircraft had all the speed and maneuverability of the German single-seat fighters did it become the most successful two-seat fighter of the First World War. Pilots flew this sturdy aircraft as they would single seat fighters, using their forward firing gun to best effect. It could also be defended effectively from the rear and could be dived at a higher speed than any other fighter on the Western Front. Numerous Canadian airmen flew Bristol Fighters during the war and one of the most celebrated was Lt.-Col. Andrew McKeever, who achieved all of his thirty-one aerial victories while exclusively flying the Bristol Fighter.

Following its wartime success, the Bristol Fighter was chosen to equip the peacetime Royal Air Force as an army co-operation aircraft. Despite their increasing age and the harsh operational conditions they were subjected to in various parts of the British Empire, reconditioned or modified versions built during the 1920s soldiered on until 1932. Several Bristol Fighters were included in an Imperial Gift to Canada in 1920, which played an important role in the establishment of the early Canadian Air Force. In this capacity, at least one Bristol Fighter is known to have operated from the historic airfield at Rockcliffe, where early aerial photographic techniques were developed, leading to the mapping of Canada’s vast North.

The Museum's aircraft is one of only three original Bristol Fighters still in existence worldwide. It was built by the Bristol Aeroplane Company in 1918. It has been identified as aircraft D7889: this number was stencilled on the remains of the aircraft's original engine cowling. Details of its service career are very limited, since most of the First World War records of the Royal flying Corps and Royal Air Force were destroyed during bombing raids on London during the early 1940s. That said, the F.2B may have been one of the aircraft powered by a Sunbeam Arab engine, rather than the preferred Rolls-Royce Falcon. Although delivered to a supply depot located at Marquise, France, it was never issued to a squadron. An RAF crew returning to the United Kingdom after the armistice may have flown the F.2B to an airfield in southern England. Stripped of its engine, instruments, fuel tanks, etc., the fuselage of the aircraft was then sold to a Mr Boddington for its wood. This fuselage as well as those of other F.2Bs he had bought were used to support the roof of his barn.

The aircraft was restored by Historic Aircraft Collection in the United Kingdom from the 1980s to early 2006. That same year, it flew in several aerial displays in Britain, powered by the world's oldest airworthy Rolls-Royce aero engine. The Museum acquired the Bristol Fighter in 2006, through trade of another aircraft.