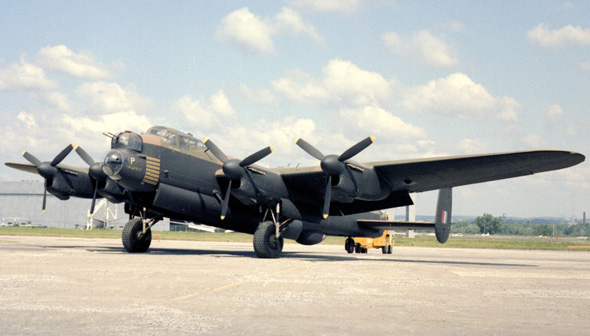 The "Lanc" was arguably the best heavy bomber used in Europe in Second World War. Although somewhat vulnerable to fighter attack, it was relatively fast, had a high ceiling, and could carry enormous loads for its size. Victory Aircraft at Malton, Ontario, produced the first Canadian-built Lancaster, a Mark X, first flown August 1, 1943. Many Canadian-built Mark Xs served overseas with No.6 Group. The Lancaster continued in the RCAF until 1965 for maritime patrol, photo survey, search and rescue, and navigator training.

Built in 1945, this is the most complete Lancaster X in existence, remaining very close to its wartime condition. It was delivered overseas to No. 425 Alouette Squadron RCAF in May 1945, but arrived too late to take part in bombing operations and was placed in long-term storage the same year.

In 1952, it served with No. 404 Maritime Patrol Squadron RCAF in Greenwood, Nova Scotia for a short period of time. The RCAF restored the aircraft in 1964, applying the nose art and squadron markings of an aircraft from No. 428 Squadron, RCAF. The tiny bombs painted on the port side of the nose indicate the number of sorties the aircraft made. The Lancaster was placed in the RCAF's historic aircraft collection in 1964, and was transferred to the Museum, along with the rest of the collection, later that year.