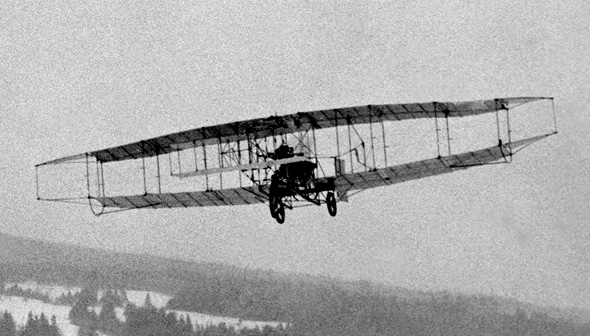 John McCurdy seated in the Siver Dart at the time he made the first powered and controlled flight in Canada, 1909. (CASM-15495) McCurdy and the Silver Dart on the historic day the aircraft first flew in Canada, February 23rd, 1909. (CASM-6735)

The original Silver Dart was built by the Aerial Experiment Association formed by Alexander Graham Bell. The first controlled powered flight in Canada occurred February 23, 1909 when the Silver Dart was flown off the ice at Baddeck, Nova Scotia, by the designer J.A.D. McCurdy. Even though the Silver Dart was an experimental aircraft, an attempt was made to sell the aircraft to the Canadian Army. For various reasons this was unsuccessful.

The Silver Dart is a canard or “elevator in front” design. Like most aircraft of the time, it appears to have had poor control characteristics. It was made of steel tube, bamboo, friction tape, wire, wood, had no brakes, and was covered with rubberized silk balloon-cloth. The museum replica is covered with doped linen. The first passenger flight in Canada was made in the Silver Dart on August 2, 1909.

The Museum's Silver Dart is an airworthy replica built by RCAF volunteers. The idea of building and flying a replica aircraft on the fiftieth anniversary of the Silver Dart was first proposed by Lionel McCaffrey, RCAF. This aircraft was built in 1958 at No. 6 Repair Depot, RCAF at Trenton and was shipped to Baddeck on February 5, 1959.

Wing Commander Paul A. Hartman flew this Silver Dart at Baddeck on the anniversary, but high, gusty winds caused it to crash (the pilot, fortunately, was unhurt). Repaired for the occasion, the aircraft was the only full-scale aircraft exhibited on the Museum's opening day, October 25, 1960.

Scroll to the right to view more of the table.