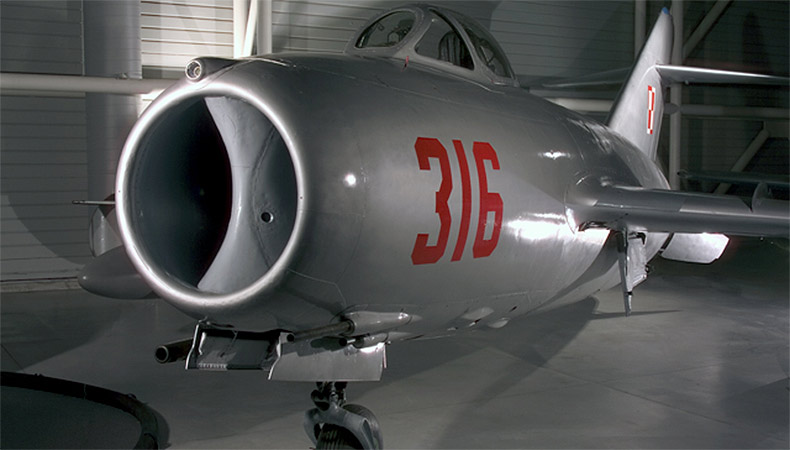 The MiG-15 is one of the great fighter aircraft in history. Its appearance over Korea in late 1950 shattered the complacency of Western air forces that, until then, had dismissed Soviet fighters as second rate. Designed to meet a 1946 specification for a daytime bomber interceptor, the MiG-15 was the Soviet Union’s first operational swept wing aircraft. Its engine was based on the Rolls-Royce Nene turbojet.

Deliveries began in the winter of 1949 but early aircraft soon revealed various minor deficiencies that were corrected in the more powerful and robust MiG-15bis. By the time production ended, some 16 000 MiG-15s of all types had been built in the Soviet Union, Czechoslovakia, Poland and China. They served in almost forty countries.

This Lim-2 was manufactured by WSK Mielec, Poland in 1954. It was used by various units of the Polish Air Force, then purchased by a Polish private collector. The Museum acquired the aircraft through exchange with the collector in 1998. The Lim-2 was delivered to Canada in two Canadian Forces Lockheed CC-130 Hercules transport aircraft in mid-1998.