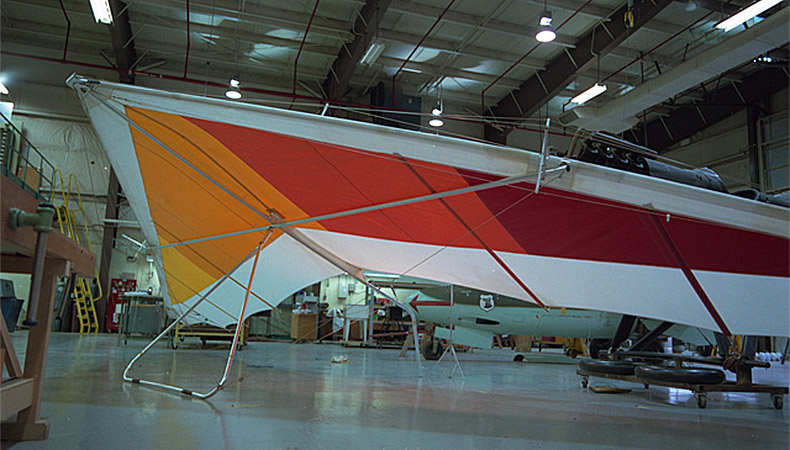 Early in 1973, two brothers from California – Bob and Chris Wills – formed one of the first hang glider manufacturing companies, Sport Kites which became Wills Wing in 1978. Both men proved highly successful as designers and pilots. In 1973 and 1974, for example, they won first and second place in the first and second national hang gliding competitions held in the United States. In the past thirty years, Wills Wing has maintained this tradition of excellence. Pilots flying the company’s hang gliders have won almost half of the titles awarded in the American national competitions.

This XC-185 was manufactured by Wills Wing Incorporated at Santa Ana, California in February 1977. It was purchased by Stewart Midwinter, a well-known Canadian hang glider pilot, at the time located at Ottawa. Midwinter first flew the glider in April 1977.

From 1977 to 1980, it was flown recreationally in Ontario, Quebec, Alberta and British Columbia. It last flew at Sumas Mountain, near Chilliwack, British Columbia on December 31, 1980. In total, the XC-185 flew approximately thirty-four hours. Its longest flight was 3 hours and 37 minutes; the highest it flew was 1,100 metres (3,600 feet); and the furthest it flew was 18 kilometres (11 miles). These three records were achieved in British Columbia. Midwinter donated the hang glider to the Museum in October 1982.